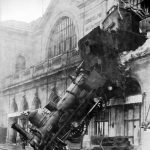 Spotlight on Movie Magic with Trains by Raymond G. Potter

Veteran director Martin Scorsese takes a break from his usual reality-laden subject matter for his newest film, the fantasy “Hugo,” based on the book, The Invention Of Hugo Cabret. In many ways, critics are calling this film a love letter to classic cinema with homages or recreations of several  golden age film staples including Buster Keaton’s Safety Last! and Georges Méliès A Trip to the Moon.  Méliès himself, a director of many, now sadly lost, short films at the turn of the twentieth century is a main character of the film, which takes places during the latter years of his life when he worked as a toymaker in the Montparnasse train station. 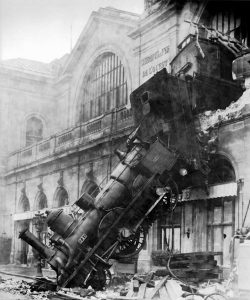 Visual effects supervisor Rob Legato was in charge of a number of FX shots set in the 1931 Paris train station that is the key locale for the film, including a reenactment of a train crash that really happened in 1895 at the station. Legato is a legendary figure in the effects industry with a resume going back 25 years. Says Legato, “my first instinct was to photograph it. I had experience photographing miniature models on the movies Titanic and Apollo 13. So we constructed the train and the window (in 1:4 scale), and it acted much like it did when the crash really occurred.” The FX company spent four months building a 20 foot tall station window and a 15 foot train which was powered from below. The second and a half long crash was filmed at high speed then slowed down to create the illusion. 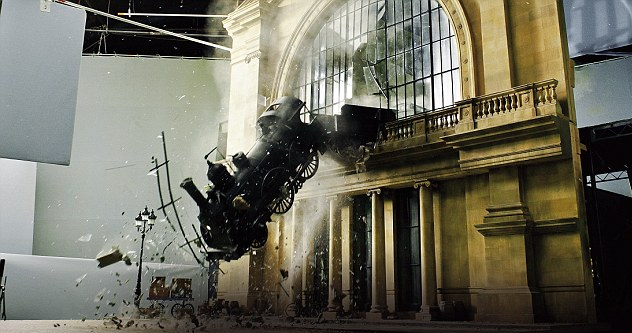 In an era when green-screen and Computer Generated Imagery are looked to as the go-to guys for film effects, it is quite refreshing that Scorsese took a classic approach to this very special effect. Yes there are green screens and graphics to replace a station and a city of a time long gone, but the love and devotion for the classic techniques are honored here right alongside the CG trickery, as is the director Méliès, who pioneered some of these magic tricks. So if a train crash done using models and classic effects techniques sounds like a good time to you, go see Hugo. It sounds like you won’t be disappointed. But, if you need a layout or other model or structure custom built, you don’t need to run to Hollywood, call SMARTT , we make dreams come true, too.