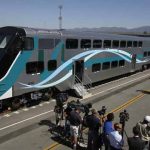 Pan Am 52 you’re clear on runway two-zero-niner, excuse me, track 1. Yes, there IS a railroad called Pan Am, formerly Guilford Transportation. Their locomotives and rolling stock are adorned with the same logo the airline used, except when they restore a locomotive to an original paint scheme. They are currently restoring a former Maine Central GP-9 number 52 back to that railroad 1970’s paint scheme. It will join a B&M GP-9 that was already restored to its 1950’s era paint scheme, thus making number 52 the second heritage painted locomotive on that railroad. As of this writing no photo of locomotive number 52 is available; the locomotive has not been put back into service. 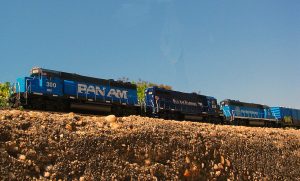 In Other News . . .
New Catalogs Show Lots of Repeats

It looks like the model railroad industry is taking a page from the movie and TV industry, lots of duplications and repeats. Gas Turbines, SD-70, ALCO PA, USRA 2-8-2, N&W J 4-8-4, and the list goes on and on. Too many of the same model locomotives are being built by more than one manufacturer. Why? How many F-3 thru F-9 do we need to choose from? The movie industry keeps producing re-makes of earlier movies, and the model railroad industry is following in their footsteps. Is it because it’s economically safe, or is it to crowd out the competitors? I believe it’s the latter! Just look at the 4500 Hp UP Gas Turbine. We currently have MTH and Athearn, and a few years back Lionel made them as well. Now throw in all those brass models of this locomotive that have been imported over the years, and you can see the over-saturation.

There are so many prototypes that have never been reproduced in any scale. It’s time we start to see some of them being offered. Even from EMD, there are models that have never been reproduced. FL-9’s and SDP-45’s are two that comes to mind. So let’s get creative here and stop trying to make what everyone else is already making. There are just not enough modelers to have ten different EMD F-3 manufacturers out there.

Hyundai Rotem: here’s one on me, up until today I never heard of them. A fellow worker, David Balton, walked up to me today and told me about Tri-Rail’s new cab car. After doing some research I found out that Tri-Rail had ordered some new rolling stock back in 2006 from Hyundai-Rotem, including 10 cab cars and 14 coaches. This order was part of a larger order placed by Metrolink in Southern California; this order was for 54 coaches and 33 cabs.  I also found out that the cars were being built in Philadelphia, PA.  Several other regional commuter railroads had also ordered cars from them.

These cars differ greatly in design from Tri-Rail’s original Bombardier cars. First off they are higher; the coaches are not tapered downward on each end. This is evident on the Metrolink cars. The one Tri-Rail cab car that I have seen photos of shows the cab end to be streamlined, similar to a GE P-40 or P-42. The other end follows the same lines as the Metrolink coaches

Tri-Rail took delivery of their first car in early 2011. However I have not seen any evidence, including a Tri-Rail press release or photos, of any other deliveries. Hopefully they are just coming in slower then planed. I hope this is the case; it would be nice to see some different passenger equipment on Tri Rail.