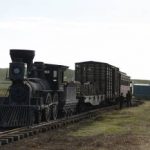 Spotlight On Recreating a Train From Wood and Foam by Raymond G. Potter

Once upon a time, the western roamed the Television range. There were westerns as far as the eye could see. Today, not so much. But AMC, the cable network that brought you fifties ad men and zombies, is trying to revive the horse opera with a new series set around the construction of the Transcontinental Railroad after the close of the US civil war. “Hell on Wheels” is the name of the show and the name of the real nomadic tent community that followed the construction of the railroad, crewed by ex soldiers, former slaves, native Americans and anyone else who was willing to work. However, one of the real stars of the show isn’t real at all. No, the train that the show revolves around is a recreation made from Styrofoam and plywood. 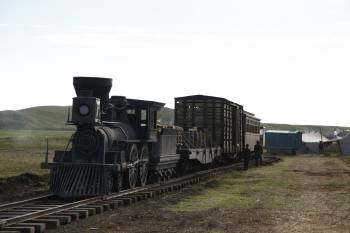 The steaming star of AMC’s new western drama, “Hell on Wheels”
Photo from the Morton Report

The production crewed rented a prairie from the Tsuu T’ina Nation in Alberta, BC and laid down 2000 feet of track as part of the backdrop for this drama, but when they looked for a train that was available, there was none in the area, and airlifting one from a museum for an extended shoot would not have been financially feasible. Instead, their Art department designed a replica of a small period workhorse type train as the real railroad crews used.

This replica is mainly composed of Styrofoam and plywood as designed in the computer and parted out to the various art department services. The train’s wheels had to be custom made from flat steel bar stock then curved and welded. There is no suspension so going over the bumps is a little tricky. The steam and black smoke is generated on set by units installed in the train, however, the vehicle itself does not have any drive mechanism. In scenes where it needs to move, a tow vehicle pulls it along and is later digitally erased in post production.

According to John Shiban, one of the executive producers, “At the same time we had the effects people build a fully realized 3D model of a train which we used in some of the episodes for certain shots.”

In terms of the sounds of the train, “The creators were very adamant that they wanted trains to be a real character in the story…” said sound-mixer David Raines in an interview with POST magazine, so the sound crew from Larson Studios headed by John Paccatiello did a lot of homework on what the train should sound like. Hopefully, the train buffs out there will approve of the authenticity.