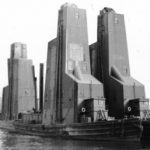 Did You Know . . . That Many Railroads Had Vast Fleets of Water Vessels? by Ray Del Papa

It’s true! Especially among railroads that served large harbors, the need to have and maintain a fleet of water vessels was great. Carfloats, flat topped barges with up to three sets of tracks, were very common in New York, Baltimore, Detroit, and the San Francisco Bay area. These barges were designed to carry up to 25 freight cars over short stretches of open water where there is no direct railroad connection.  An example of this was the New York harbor area including the New Jersey side.  Here there was no bridge or tunnel for freight traffic to connect the New York side with New Jersey. Therefore, those railroads that served the harbor needed a vast Carfloat operation.

Other vessels that were common include tug boats, covered barges, refrigerated barges, lighters (both with and without booms), ferryboats, livestock barges, and floating grain elevators. For more information on rail-marine operation Walthers and Morning Sun Books have publications on the subject.

Another interesting aspect of rail marine operation was the land facilities that were built to support the railroads’ marine operation. The two largest ones were the ferry terminals; several railroads in the New York area had commuter lines in New Jersey that connected directly to ferry boats that crossed the Hudson River to terminals in Manhattan. The Erie, Lackawanna, New York Central, Pennsylvania, and the Central of New Jersey all had this service. But the most important facilities were the carfloat bridges and the railroad yards that supported them. There were no fewer than 10 different railroads that had carfloat operation in New York harbor. They filled the waters around New York with hundreds of boats. It would have been a lot more difficult for Capt Chesley Sullenberger to ditch his US Airways airbus 40 years ago in the Hudson River. Too many trains.