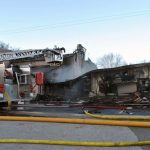 In case you haven’t heard, the Woodland Scenics plant at Linn Creek, Missouri caught fire on January 4. There were no injuries. Woodland Scenics is considered to be one of the largest manufacturers of model railroad scenic supplies in the world. The company employs over 150 people at the Linn Creek facilities. The fire was contained to only two buildings. Fortunately, the company production facilities are dispersed across several buildings located throughout the town. Woodland Scenics does not expect the fire will have as great an effect on production as first thought. According to Gale Cousins, “our shipping department, warehouse, and corporate offices, as well as most of our manufacturing buildings were spared from damage.” They also feel that business should be back to normal soon. We are all relieved to hear that. 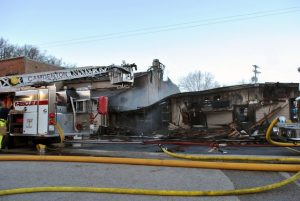 The Woodland Scenics fire, photo from the Lake Today News

Thankfully, as previously stated, no one was hurt, including the firefighters; however, it might be time for them to release a vehicle scene with a fire truck and firefighters.  They could even add one of their structures with a smoke generator built in.

Good Reefer(s) On the Way

There seems to be numerous shipments of new reefer(s) heading our way this spring, but don’t report this to the DEA. Several companies are reporting new releases of 37’ and 40’reefers, (refrigerated) cars both steel and wood construction, as well as some milk cars. Rapido is releasing 37’wood reefers, based on a design built by GARX, General America between 1937 and 1941. Intermountain Railway company are re-releasing their PFE R40-10 reefers and steel milk cars. The latter are complete with steam and signal lines for passenger services. They will also rerelease their Red Caboose Line’s 40’ wood reefer in seven different paint schemes.

MTH is releasing their R40-2 40’ wood reefers in six-packs and singles; several different paint schemes will be available. All these releases have added on grab irons, ladders, and other detailed parts not cast into the molds. When will someone release a Colombian Gold Reefer Company 40’ reefer? Or how about a Texas & Mexico RR, “The Joint Line”, 50’ reefer?

As Americans are getting bigger and fatter, so is the need for larger seats on trains. Both Amtrak and NJ Transit realize this problem and are taking steps to deal with this big issue.  Amtrak will provide new wider seats on 25 new dining cars starting in 2013. NJ transit announced that 100 new double-decker train cars will have 2.2 inch wider seats. However, that does mean there will be less seating capacity per car, so more people will have to stand. And who should be the ones standing more? Certainly not the person weighing 150 lbs! Both Metro North and the Long Island Railroad are looking into how they will deal with this problem on their new passenger car orders. However the US is not the first country to deal with this problem, Sao Paulo in Brazil was to first to install larger seats on their subways back in 2009.

There have been some politicians out there demanding that Amtrak and commuter trains need to carry heavier loads; that day is coming.  Speaking of heavy loads and this being that time of year for the Super Bowl; I often wonder if the chartered aircraft the professional football teams use has  any kind of special seating?

However the real news here is that Amtrak is getting 25 new dining cars starting in 2013. I know the dining cars on the Florida trains date to the 1950’s and are the oldest cars in service today accommodating passengers. I hope to take the train north to Washington DC from Miami this April. If I do, I will report on that trip.

Rarely if ever has commuter equipment been the focus of such an ambitious model railroad project. Con Cor announced over a year ago it would do the PRR MP-54 commuter cars in HO scale. Previously these cars have only been done in brass or in resin, the resin version being only the body shells.

Very soon, Co Cor will release the entire fleet of not only PRR cars but the Long Island version as well, and in several different paint and lettering schemes. There will be baggage, baggage-mail, combine-coach, coach, and trailer (no pantograph), in all the different PRR letting variations. On the Long Island side, Baggage-mail, combine-coach, and a coach all with third rail pickup shoes. All will be available as ether powered or unpowered, except for the trailers. The only thing that does not appear to be offered at this time is a Penn Central version.