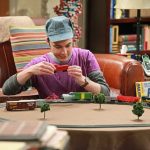 Television is often the vehicle for reflecting society and acceptable social habits (or the reverse) so it’s nice to see that several recent TV shows have showed their characters enjoying model trains. Actually, the two shows in question are consistently the top scripted comedy and drama in the national ratings. I refer specifically to CBS’s The Big Bang Theory and NCIS. 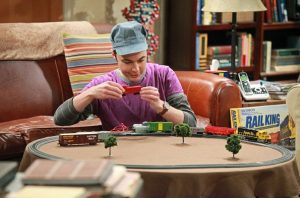 In a recent episode of The Big Bang Theory, Theoretical Physicist Dr. Sheldon Cooper, played by Emmy winner Jim Parsons, is going to the new train shop to see a discussion of which is the superior scale, but his “open” mind is made up, “It’s O gauge or no gauge.” Despite his rigid stance, he is nevertheless populating his coffee table with a Bachmann Rail-King HO train set later in the same episode as it turned out that the discussion was actually a shameless sales pitch for HO starter sets. By the end of the story Sheldon has proclaimed “It’s official. I’m an HO Trainiac!”

Watch the Train clips from this episode of The Big Bang Theory all threaded together on YouTube . . . 04:20

NCIS is a procedural drama about investigators who specialize in military related cases as part of the Naval Criminal Investigative Service under the department of the Navy. In a recent NCISepisode, the team’s medical examiner, Dr. Donald (Ducky) Mallard, played by veteran character actor David McCallum, is cleaning his HO Hornby locomotive at his desk. A model train (apparently O-gauge) has appeared in the background of numerous episodes, and now another gets a “walk-on” as it were. And the train in question?. . . it’s a Mallard. Someone on the show must be a train fan as an earlier episode had a criminal holding Ducky hostage discussing the Mallard’s record with him.

From Wikipedia, “Number 4468 Mallard is a London and North Eastern Railway Class A4 4-6-2 Pacific steam locomotive built at Doncaster, England in 1938. While in other respects a relatively typical member of its class, it is historically significant for being the holder of the official World Speed Record for steam locomotives.”

While many of us remember Arnold’s train obsession on Diff’rent Strokes and the ride-on loco that was a regular set piece on Silver Spoons, model trains have not been a big part of pop-culture media recently so it’s nice to see them being shown again in a positive light, especially considering that both hobbyists depicted are adults (arguably, in Sheldon’s case) and both are doctors. The positive message seems to be that model trains are not just a hobby for kids. Grown-ups can enjoy them too.