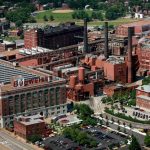 I am not sure if I first heard the term “nondescript apparatus” from Art Curren or Dean Freytag. However I do remember what they were referring to — any apparatus that gives the appearance that it belongs in a specific place on a specific structure is, in that case, right. Here is what I do remember Dean Freytag saying “If it looks right, put it there.” My definition of a nondescript apparatus as it refers to industrial structures is any appliance that fits in to the function of that industry is therefore right. Examples: pipes, cooling towers, vents, blowers, turbines, cyclones, condensing units, tanks, and the combination of any of these. 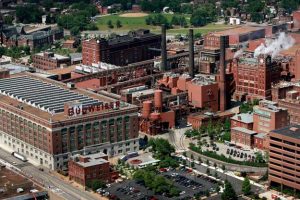 The Anheuser Busch Brewery in St. Louis, inspiration for the model brewery detailed below. Photo from forums at allsentra.com

I love to make industrial buildings, and I love to detail them with as many appliances as possible, without over doing it. So I first study the type of industry I am doing; online photos and books are a good start.  Once I find a good reference I try to figure out how I can duplicate those really cool gizmos that are on the sides and roofs of that building. Also, since most of my work is freelance, using non-descript apparatus works very well, all it has to be is close to something in real life that you have a photo of.

I am currently building a very large brewery complex, complete with grain silos, malt house, brewery, and plenty of industrial appliances. As you can see by the photo below, a brewery has a lot of detail, so much that it would be almost imposable to recreate totally. The other problem is that this photo is the only good photo I’ve found of the brewery, so I will have to wing it on the details. However, we do see a lot of pipes, conveyers, small silos, condensing towers & units, vents, and smoke stacks.  Below this photo is a photo of my uncompleted brewery. It is far enough along, however, to see that it too has many of the same features, the big difference being that two thirds of my brewery is made of concrete and not brick.

Some of the parts I used as a base for these appliances include the cooling/ condensing towers from the Walthers Champion Meat Packing Plant and the A. J. Frost Cold Storage Building. There are resin cast duplicates of the large side vent from the Superior Bakery kit, and all the top detail parts are from the Medusa Cement Plant kit. Some of the detail parts that were bought separately include O scale cyclone vents from Model Tech Studios, refrigeration units by Chooch Enterprises, Walthers roof detail kit (out of stock), various vertical and horizontal tanks, and the wall mounted cyclone vents that are included in the Walthers Red Wing Mill kit and also sold as a separate detail part kit. Some of these I built as directed, most however were highly modified or kit-bashed.