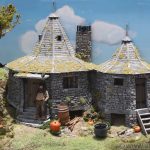 In the amazing imagination of writer J.K. Rowling, Rubeus Hagrid is the loyal half-giant groundskeeper at Hogwarts School for Witchcraft and Wizardry. Hagrid lives on campus in a stone hut at the edge of the Forbidden Forest, although his hut has, through the magic of changing film decorators and set dressers, moved around several times. The hut, as shown, was designed from numerous photo references, mostly based on the later film appearances, when the look finally settled.

This diorama is part of a large fantastical model railroad project featuring a number of movie based dioramas, including several from the Harry Potter universe. Each was completely custom fabricated. You can see more here...