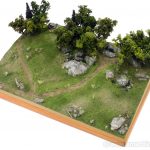 "Little Round Top . . . was the site of an unsuccessful assault by Confederate troops against the Union left flank on July 2, 1863, the second day of the Battle of Gettysburg." ---from Wikipedia.