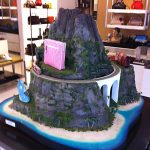 This was the idea behind the tropical island volcano dreamed up for Marc Jacobs' prominent New York location for Fashion Week 2012!

This project seamlessly combines a lush tropical island, a glowing smoking volcano, a modern train that circles the island, a stone viaduct bridge, and a number of "Easter eggs" for the alert viewer. The lava trails down the side of the caldera glow and slowly pulse bright orange. To further the effect, a ring of orange LED's sits inside the crater rim to light up the smoke that puffs out. Interspersed among these elements are deliberately flat and vacant areas intended to display small fashion items to the customers, like purses, shoes, jewelry, etc.