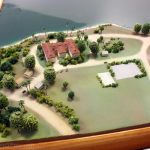 This display recreates Ford Island, the location of "Battleship Row" in the Pearl Harbor Naval Base as it appeared just prior to the December 7, 1941 attack by the Imperial Japanese forces that launched the US into World War 2.