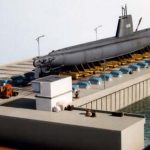 A diorama can be that unique one-of-a-kind gift to celebrate years of service, cherished memories, or a particular milestone in one’s life.

This diorama was presented as a retirement gift to an executive of Rolls Royce Corporation’s Synchrolift Division. It depicts one of their dry-dock units that is capable of lifting a full sized ship out of the water and trucking it away for maintenance and repair on special rail-cars.

The submarine depicted is the USS Sea Poacher, seen here as it appeared in the 1960’s, when he served on it, after modernization upgrades were made to the 1940’s era hull and tower. The entire dock and lift mechanisms were custom built and the sub was modified to capture its later appearance