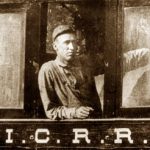 How many of us remember the songs we sang during our youth in school. Among the musical scores that we learned were three songs about railroaders: Casey Jones, John Henry, and The Wreck of Old 97. What we probably did not know at the time was that these three songs actually were based on real people and events. From Woody Guthrie, to Johnny Cash, to Pubcrawlers – a punk rock band, each has recorded at least one of these songs. In fact the lyrics to the Wreck of Old 97 became the first ever law- suit in the U.S. regarding musical copyrights. Over the next three blogs we will talk about these not just great railroad legends, but stories that are well embedded into American folklore. So now let’s now take a look into the legends behind the lyrics.

John Luther (“Casey”) Jones was a locomotive engineer for the Illinois Central Railroad back in the 1890’s. On April 29, 1900, Casey had just finished his run to Memphis on IC train number two. IC train number two was the crack Chicago & New Orleans Limited, later to become the famous Panama Limited. Normally Casey would have rested in Memphis, and then he would return on number three, the south bound New Orleans Fast Mail. However the regular engineer on number one, The Chicago & New Orleans south bound counterpart reported sick, so Casey volunteered to take his run, even though this would mean that he would not get the proper rest between runs.  By the time number one left the station in Memphis, the train was running 95 minutes behind schedule. The run between Memphis and Jackson, Mississippi was flat and fast, however, there were some sections where the rail was light and shaky.

By the time Casey reached Durant, Mississippi, 145 miles from Memphis, he was nearly on time. At Durant he was given new orders to meet train number two at the siding at Goodman, Mississippi and then proceed to Vaughan where he would meet train number twenty-six. Train number twenty-six was running in two sections, and both trains would be waiting for him in the siding at Vaughan. This gave Casey priority over the two trains and would mean he would not have to stop.

Now only five minutes behind the advertised time and with fast track in front of him, Casey opened up number one in hopes of making up those last five minutes. Casey was now bearing down on Vaughan thinking that he had a clear track; however, things at Vaughan had gotten out of control. First, two freight trains were already in the siding at Vaughan, forcing number twenty-six to take to the house track there. This move could only be accomplished by doing a “saw by,” a maneuver in which one train first moves forward (onto the mainline) to allow the other to get into the third track, and then he must move back (into the siding) in order to clear the mainline. The problem was that in the process of this switching move, an air hose broke on the freight train leaving four cars out on the mainline.

Casey now on time and running at 75 MPH, was nearing Vaughan not knowing of this problem.  The other problem was that the cars were not visible to him until he rounded a curve. The fireman, Simeon Webb, was the first to see the red maker lights of the caboose sitting on the main. Webb cried out, “There’s something on the main!” Casey replied, “Jump, Slim, Jump!” Casey did all he could to stop his train. He threw the locomotive in reverse and applied the air brakes, and he put his whistle into a scream to warn everyone that two trains were going to bump.  Unfortunately, the laws of physics were against Casey; too much speed, too little track. Casey did slow his train from 75 to 35 MPH when they hit, however, in order to do this Casey needed to stay with his train. By slowing his train to 35 MPH he probably saved lives the lives of passenger, but Casey lost his own life in the tradeoff. 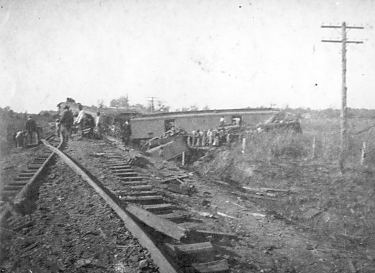 The scene of the wreck of Casey’s train. Photo from the Casey Jones Museum

When they pulled Casey from the wreckage, Legend has it that his hand was still clutching the whistle cord. Casey Jones was laid to rest at the Mount Calvary Cemetery in Jackson, Mississippi, on May 2, 1900. There have been numerous references to Casey Jones in books and film, however, nothing can compare to the way he was immortalized in song. From Kris Kristofferson to the Grateful Dead, Casey Jones’ name is still invoked by today’s rockers, folkies, country, and blues musicians. However the song remembered by most people is this version: 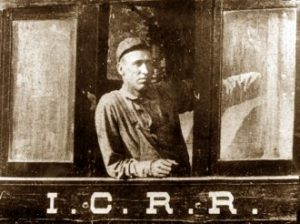 Come all you rounders if you want to hear
A story ’bout a brave engineer,
Casey Jones was the rounder’s name
‘Twas on the Illinois Central that he won his fame.

Casey pulled into Memphis on Number Four,
The engine foreman met him at the roundhouse door;
Said, “Joe Lewis won’t be able to make his run
So you’ll have to double out on Number One.”

If I can have Sim Webb, my fireman, my engine 382,
Although I’m tired and weary, I’ll take her through.
Put on my whistle that come in today
Cause I mean to keep her wailing as we ride and pray.

They pulled out of Memphis nearly two hours late,
Soon they were speeding at a terrible rate.
And the people knew by the whistle’s moan.
That the man at the throttle was Casey Jones.

Need more coal there, fireman Sim,
Open that door and heave it in.
Give that shovel all you got
And we’ll reach Canton on the dot

On April 30, 1900, that rainy morn,
Down in Mississippi near the town of Vaughan,
Sped the Cannonball Special only two minutes late
Traveling 70 miles an hour when they saw a freight.

The caboose number 83 was on the main line,
Casey’s last words were “Jump, Sim, while you have the time.”
At 3:52 that morning came the fareful end,
Casey took his farewell trip to the promised land.

His wife and three children were left to mourn
The tragic death of Casey on that April morn.
May God through His goodness keep them by His grace
Till they all meet together in that heavenly place.

Casey’s body lies buried in Jackson, Tennessee
Close beside the tracks of the old I.C.
May his spirit live forever throughout the land
As the greatest of all heroes of a railroad man.

As for the story of the song, Wallace Saunders was an African American who worked in the IC locomotive shops at Canton.  Wallace loved to make up songs and sing them as he worked. When he heard about Casey’s death and the story that surrounded it, he made up a song about it. Soon other railroaders who came in and out of the shop picked up the tune and started to pass it along the IC line. Before long the song reached the local Vaudeville circuit through Fred and Bert Leighton, the brother of IC engineer William Leighton; from there it spread around the country.

There is a new sad postscript to this story. The line that Casey took that faithful day may be abandoned. On September 20, 2011, the Grenada Railroad, current operators of that line, filed a petition with the Surface Transportation Board to abandon 81 miles of track between Grenada and Canton. The town of Vaughan, Mississippi, the site of the wreck, is located in that stretch of railroad.