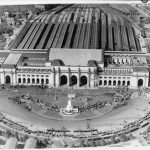 Over the years, the DC area has played a major roll for US railroads, both in freight and passenger operations.  Because of this importance, Washington DC has had and still does have some very interesting railroad facilities.

Let’s start with Washington DC’s most distinctive railroad landmark, Washington Union Terminal. Opened in 1907, WUT replaced separate railroad stations operated by the Baltimore & Ohio RR and the Pennsylvania RR. This also eliminated rail operation on and in the vicinity of the National Mall, allowing for the Mall’s current appearance.  The new station would serve not only the B&O and PRR, but also the Chesapeake & Ohio, Southern, and the Richmond, Fredericksburg & Potomac RR – the RF&P. The RF&P allowed a direct connection for two major Florida Railroads, the Atlantic Coast Line and the Seaboard Air Line in Richmond, VA. The three railroads that entered the station from the south (Southern, RF&P, and the C&O) did so in a 3 mile long tunnel that passed under the US Capital and entered the station at a lower level than the B&O and PRR trains did. 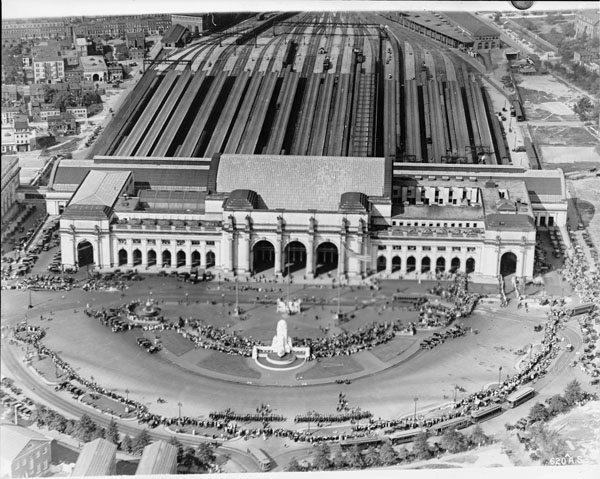 Washington Union Station, it was designed to reflect the great City Gates of the past. Photo Wikimedia Commons

The end of the 1930’s through the 1950’s became the most colorful years in regards to railroad paint schemes at WUT. During this time one could see a rainbow of colorful train at the station. Green, silver, and red PRR GG-1’s, E units of purple and silver, ACL , blue and gray, RF&P, green and white, Southern blue, yellow, and gray, C&O, and the B&O’s dark blue, blue, and gray scheme. Fleets of silver stream-liners arrived and departed the station constantly, right up until the inception of Amtrak; WUT unlike many other railroad stations in the country, remained a very busy place.

Some major events that occurred at WUT were the arrival of the trains carrying Franklin Delano Roosevelt’s body back from Warm Springs, GA in 1945, and Robert F Kennedy’s body from New York in 1968. The station also saw the movement of massive amounts of people into the city for presidential inaugurations and the great Civil Rights rallies of the early 1960’s.

In 1963, Martin Luther King tapped J Phillip Randolph, the organizer and head of the Brotherhood of Pullman Car Porters, the first largely black union in the US, to lead the Civil Rights march on Washington. Many of the hundreds of thousands coming to Washington for that event needed transportation. With Randolph’s experience in rail transportation he was able to accomplish this huge logistical effort efficiently and with few delays. Many of those attending arrived and left by train, forcing the participating railroads to scramble for passenger cars, however, this monumental feat was accomplished thanks to both Randolph and the railroads.

However, WUT’s most memorable event was rather infamous. On January 15, 1953, just days before the inauguration of Dwight D Eisenhower, PRR’s inbound Federal from Boston lost its air breaks as it approached the station. At 25 mph the GG-1 4876 hit the end-of-track bumper and crashed into the main concourse, then fell through the floor into the basement; remarkably, no one was killed. Because the inauguration was only days away, the concourse was temporarily boarded over with the locomotive still in the basement. After the inauguration, the locomotive was cut into three sections and shipped to the Pennsylvania shop in Wilmington, DE where it was reassembled and repaired. It was soon back in service hauling passenger trains. This event inspired the famous climactic scene in the movie Silver Streak when the train loses control and crashes through the station in Chicago!

Over the years numerous passenger trains have called on WUT; some of the more famous ones are listed below along with the railroads that operated them

This is only a sampling of some of the more famous trains that have used the station over the years or are still using it today. Currently, Amtrak operates the only intercity passenger trains at WTU. One can still board a train at WUT for Chicago, Florida, Atlanta and New Orleans. New York Service is lead by Amtrak’s high speed (120mph) Acela Trains; this service is now offered to Boston, as well. The greatest change in the number of passengers using WUT came from local commuter operations not including DC Metro. Two commuter authorities, Maryland Area Regional Commuter (MARC) and Virginia Rail Express (VRE) provide the service. Thousands of passengers each day use WUT to commute from home to work and back.

Amtrak has just unveiled new plans for the station, one that will alter the landscape of the working side (tracks and platforms) of the station greatly. Sadly, this will cause these areas to be covered over; no longer giving WUT any outside evidence that it is a functional railroad station.  On top of the covered over space Amtrak plans to build, with the cooperation of developers, residential, office, and commercial facilities.