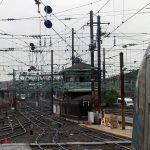 The second biggest railroad landmark in the DC area is the railroad yard in Alexandra, VA, known as Potomac Yards, or Pot Yards for short. Before we move over to Pot yard, let’s take a look at some of the other railroad locations of note in DC. There are three major support locations to Washington Union Terminal (WUT).  The first is K Tower, located at the throat of WUT. This is the last manned operating tower in DC; it governs all train movement in and out of the station. It derives its name from the fact it sits right over K Street, that infamous street in DC where most of the big lobbyist have their offices.  Currently, during the busiest time of the day, it takes 4 operators to man the tower. It remains one of the truly unchanged railroad facilities at WUT. 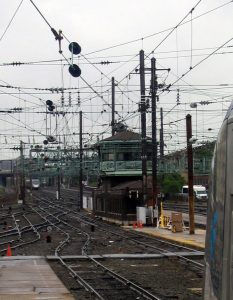 Proceeding northeast out of the station, we come to the Ivy City engine terminal and coach yard. This engine terminal was where all those brightly colored 1st generation diesels used to line up before their assignments on south and westbound streamlines. ACL, RF&P, B&O, C&O and Southern units could be seen near PRR GG-1’s on the ready tracks. Many a railroad has used this location for publicity photos.

From the railroad operations side at Ivy City, all ACL passenger trains ran straight through to WUT with their own power, unlike Seaboard’s passenger trains that had to change power in Richmond, VA with the RF&P. The RF&P maintained a fleet of 23 passenger locomotives, 20 E-8 (15 A units, 5 B units) and 3 FP-7’s; mostly for the Seaboard passenger trains. Most trains would receive two locomotives; however the longer ones would get 3. When you consider that even into the middle 1960’s there were still 12-14 trains a day in each direction utilizing RF&P’s tracks, the need for a larger passenger locomotive fleet would have been evident. However, having ACL supplement the 23 RF&P locomotives with their own power negated the need for the RF&P to purchase more passenger locomotives. This allowed the RF&P to assign sufficient power to each Seaboard passenger train. To the advantage of the ACL, not having to change power in Richmond allowed their train to operate on a faster schedule than Seaboards.  This power agreement also allowed them to keep their 3 FP-7’s in the freight locomotive pool when needed. The FP-7’s would only supplement the E -8’s in passenger service when there was a shortage of power due to unexpected maintenance problems, or during peak travel seasons such as holidays or special events.

Adjacent to the Ivy City engine terminal, is the Ivy City Coach Yard. This facility was used mostly by the B&O and PRR railroads, since most Southern, C&O, and the Florida trains, ran through to New York City. However, the coach yard was still a busy place. Both the B&O and the PRR had long distance passenger trains to Chicago, Saint Louis, Detroit, Pittsburgh, Cincinnati, and Buffalo. Both railroads offered frequent service to New York City and Boston on the PRR. With all these trains calling Ivy City home, it gave their crews plenty of work. To do the switching at both Ivy City and the station, WUT had its own fleet of locomotives, RS-1s.  They also operated about 5 miles of track between the two facilities.

The coach yard had a commissary for dining and lounge cars, a wash rack to clean the exterior of the cars, a rolling stock maintenance facility and a boiler house. The boiler house served two purposes: first to supply power to the buildings in the yard and station, Second, it supplied heat to passenger cars while they were in the yard, or waiting at the station to be coupled to an outgoing train. Up until the late 1970’s, all passenger cars were heated with steam heat. While operating in a train all passenger locomotives would have steam-heat generators. Modelers take note, while sitting in a station or coach yard without a locomotive, steam pipes carried steam from the boiler house to the standing cars by way of special connectors. These special connectors would allow passenger cars to be hooked right into the physical plant steam-heat system. 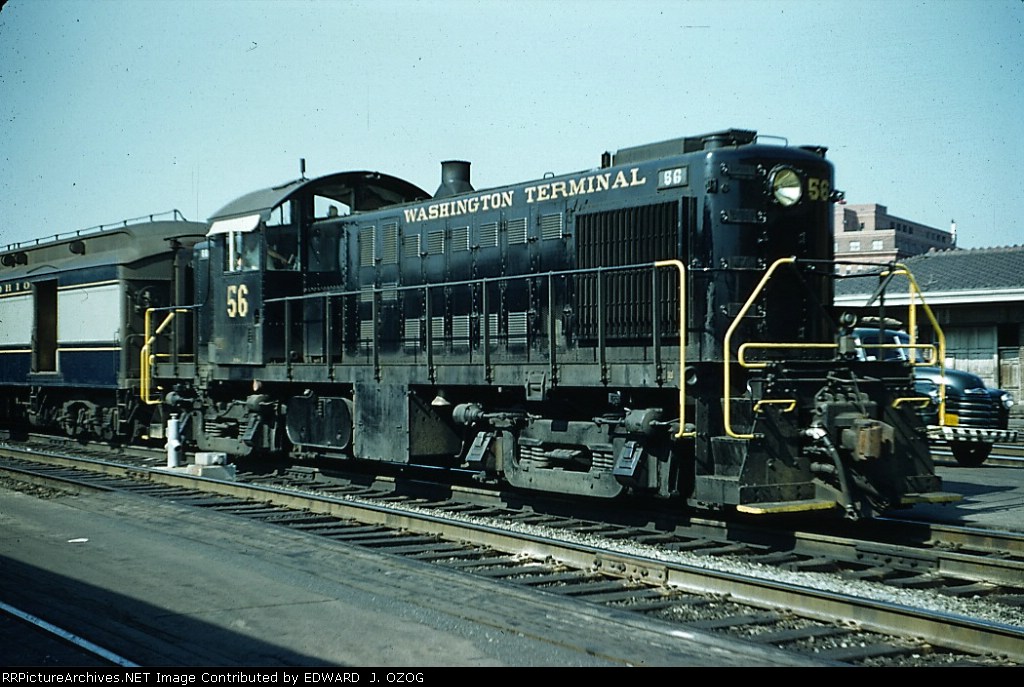