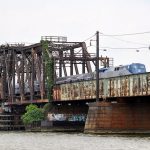 In part one and two, we covered Washington Union Station and its support facilities, let’s now turn around and head for the Potomac Yard. First, we must cross the Potomac River railroad bridge. This swing bridge crosses the river at one of its narrowest points. However, the Potomac River is no long a navigable waterway above this point so the bridge has not opened in decades.  At one time catenary was strung over both tracks for use by PRR electrics heading in and out of Pot Yard. Conrail stopped using electric locomotives in 1981; thereafter, the wires came down over the freight-only lines. Today only the trolley polls remain, and vines cover part of the trusses. 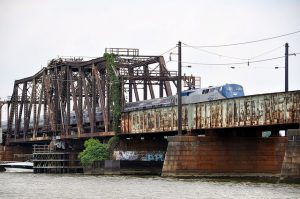 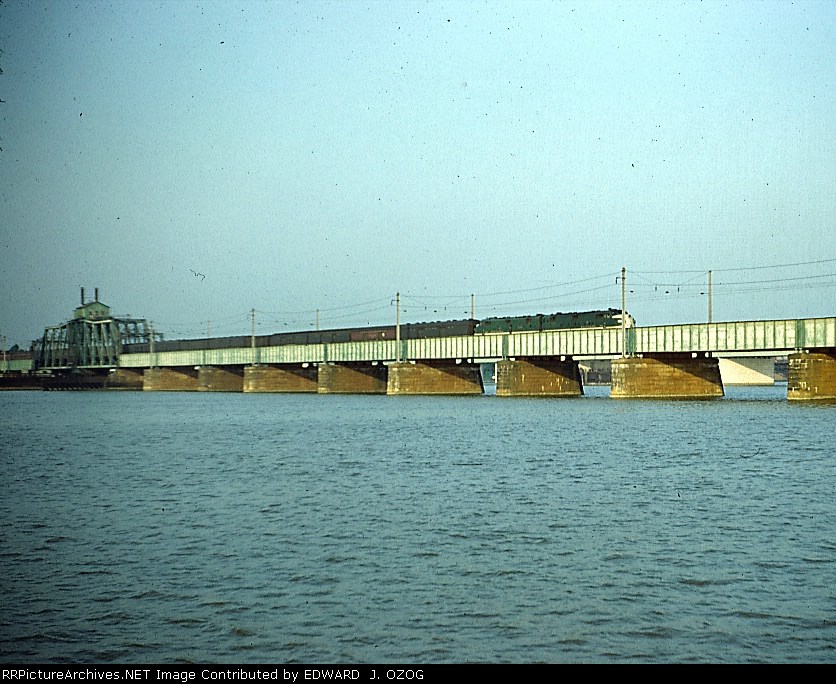 The good old days! Note the structure on top of the swing bridge. Judging by the height of the new Metro Bridge, adjacent to the RR Bridge, this bridge no longer is a movable bridge. Photo Edward J Ozog RailPictures. Net

Now let’s move over to the second most famous railroad facility in the DC area, the now gone Potomac Yards (Pot Yards) in Alexandra, VA. Here is where North meets South in railroad territories. This large hump (classification) yard served the same five railroads WUT served: B&O, C&O, RF&P, PRR and Southern. Even though all five railroads had stock in Pot yards, the RF&P controlled its operations. For most of its history, the yard would handle four to five thousand cars per day. During WWII that number was almost doubled. Today several railroad yards have picked up what Potomac used to do, Richmond, VA, Enola, PA, and Brunswick, MD are among those. 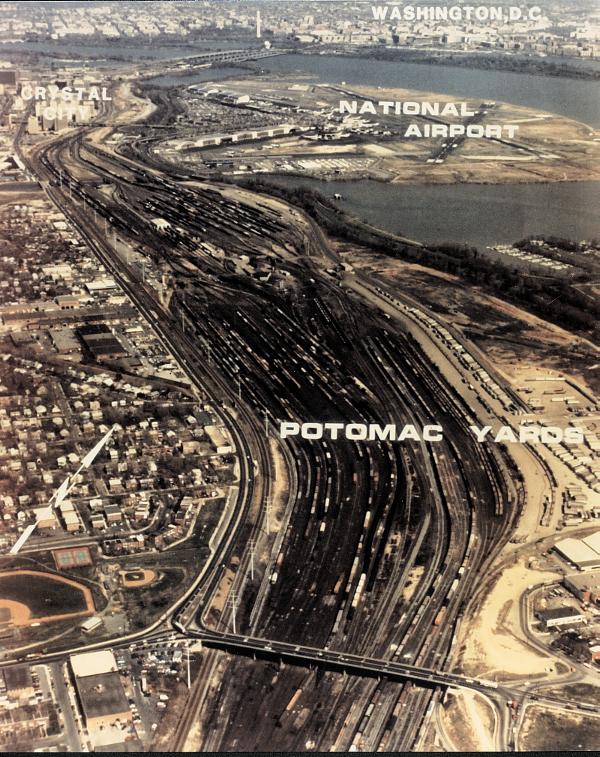 Here is an aerial view of Pot yards. As you can see it took up a lot of valuable property. Photo trainweb.com

Here is where the RF&P derives its blue-gray paint scheme; Pot Yard was the Mason-Dixon Line for north-south freight traffic. The three southern roads handed agricultural products over to the two northern lines, the B&O and PRR. In turn, the B&O and PRR would transfer northern industrial goods over to the Southern, C&O and the RF&P. The RF&P would also do this with its passenger operation, turning the vast majority of the freight over to the ACL and Seaboard in Richmond. However, as more and more factories relocated south, the flow of industrial goods would be in both directions starting in the 1950’s.

Over the years, other changes came to the yard in the way of mergers and trackage rights. First, the PRR Keystone was replaced by the ”worms in love” logo of Penn Central  (the merger between the New York Central and the PRR). In 1976 PC was replaced by Conrail which took over operation of 6 bankrupted railroads in the northeast, of which PC was one.  Second, The C&O and B&O joined with the Western Maryland to form the Chessie System; they in turn merged with Seaboard System, to form CSX (Chessie Seaboard Express). With the formation of CSX, the RF&P was absorbed into it, losing its own image as a railroad. Over on the Southern side, Southern merged with the Norfolk & Western Railroad to form Norfolk Southern in 1982. Both NS and CSX bought Conrail in 1999, and then carved it up between the two of them. Basically undoing the PC merger with CSX acquiring the former NYC lines and NS getting the PRR lines.

Adding to the entire Pot Yard railroad shuffle and reshuffle   was the trackage rights agreements made with the Delaware & Western railroad when Conrail was formed. They got the right to enter Pot yard so they could complete a direct line from the South to Canada. The reasoning behind this was the hope the D&H would be competitive with Conrail. However, that did not work, and the D&H went through a series of outside operators that included Guilford and the New York Susquehanna & Western.  They were finally bought by the Canadian Pacific Railroad. So by the time that Pot Yard shut down, its tenants had changed to NS, CSX, Conrail, D&H (NYS&W, Guilford), and the RF&P

Nowhere in the yard was the diversity of those railroads that called on Pot Yard more evident than in the locomotive terminal. Over the Years, PRR electrics (GG-1, P-5a, E-2b, E-2c, E-3 & E-44) would be seen with F units from the B&O, C&O, Southern and the RF&P. In the 1960’s and the 1970’s, second generation locomotives began to replace those venerable F units. One could see RF&P, B&O, and C&O GP 40-2’s, sharing the ready tracks with Southern high hood SD 45’s and U-33c’s. The early Conrail years brought power from all the railroads Conrail had taken over: Erie Lackawanna, Penn Central, Reading, Central of New Jersey, Lehigh Valley, and the Lehigh & New England. Also, this was the time that D&H locomotives arrived in the yard on a daily basis. In the end, one could find NS, Conrail, CSX, D&H (Guilford, NYS&W and CP), as well as RF&P holdovers. 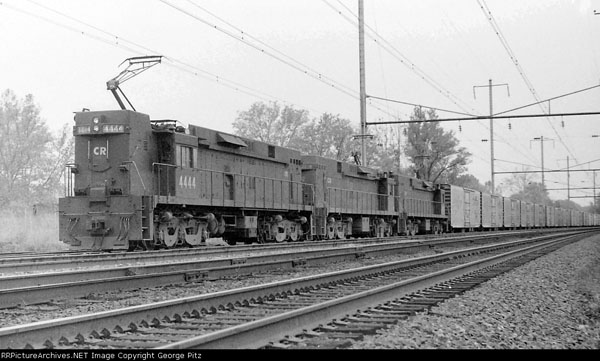 Pot Yard also had its named trains. Seaboard Systems railroad would own them both: the hot piggyback train known as the Orange Blossom Special, named after its SAL passenger counterpart, and the Tropicana Juice Train, a three-day-a -week solid train of Tropicana orange juice between Bradenton, Florida and Kearney, NJ. Both trains were given first class status when on the mainline with only passenger trains getting priority. 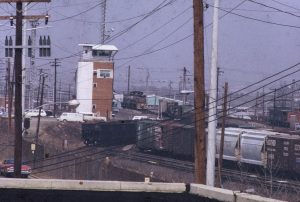 Up until the very end it was those RF&P SW 1500 and slugs that held down all the yard jobs, especially working the northbound and southbound humps in the classification yard. In steam days there was an ex-C&O H-7 2-8-8-2 that worked those humps during WWII, minus their Elesco feedwater heater. 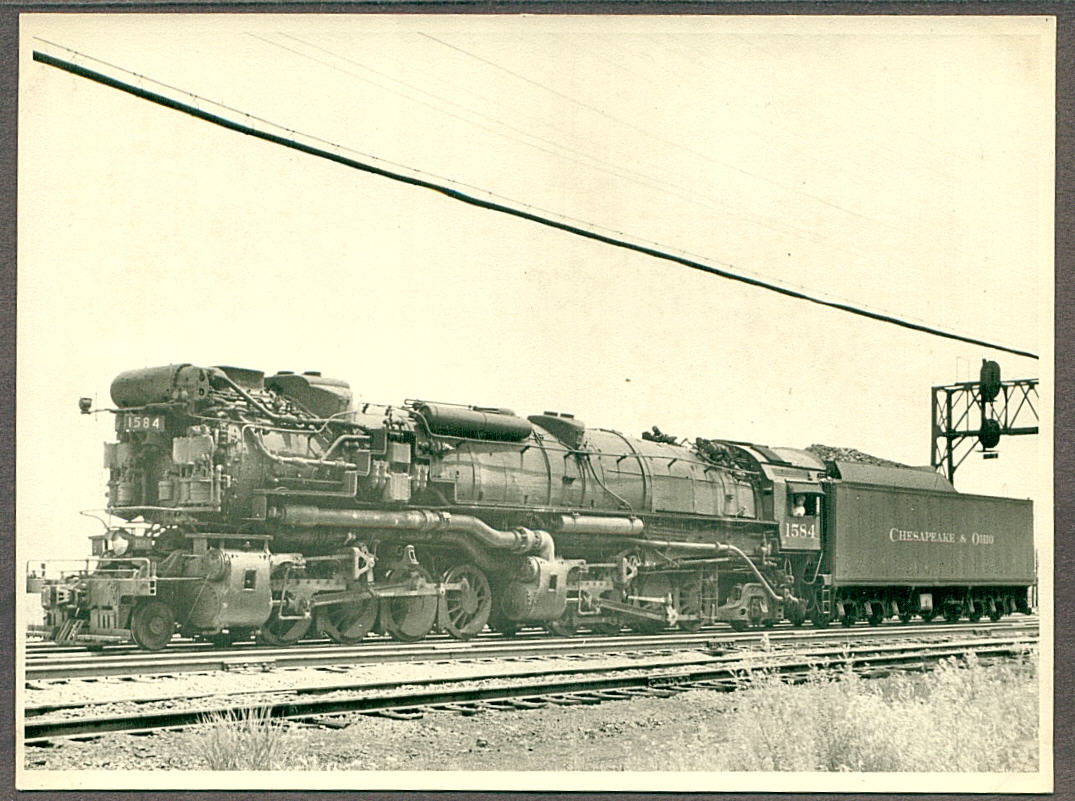 Take away the Elesco Feedwater Heater and you got how the RF&P yard loco looked.
That’s one big locomotive just for shoving cars up the hump. Photo, Atlas Forum 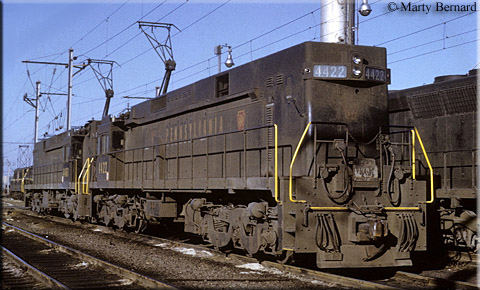 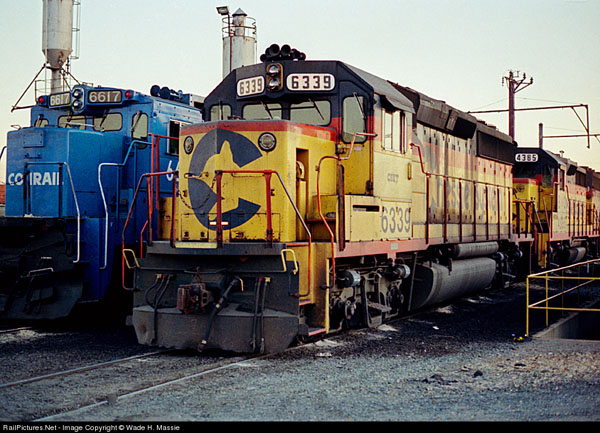 Chessie and Conrail share the Engine Terminal at Pot Yard. Photo by Wade Massie from RailPictures.Net

Not every railroad that operated out of Pot Yard was on a large scale. For example, look at the Washington and Old Dominion Railroad. This little shortline ran out of a small yard adjacent to Pot and crossed it on a long steel deck girder bridge. The former interurban line (intercity eclectic trolley line) then ran off into the then rural countryside around Falls Church, VA. Back in the 1930’s, this little railroad once ran almost the whole distance to the Blue Ridge Mountains as an interurban line.  The railroad closed out its existence as a stepchild of the Chesapeake & Ohio Railroad, using C&O locomotives during the 1950’s.

Sadly the end came to Pot Yard in 1989 when the powers-that-be in the CSX legal department deemed the land was way too valuable for use as a railroad yard. So the yard was taken out of service and plans were made to sell the property for development. However, it was a railroad yard for many years, and during that time numerous toxic chemicals were spilled into the ground in and around the yard.  Almost immediately the EPA declared it a Superfund site delaying development until 1998 when they declared the cleanup complete. Today, when one passes through Alexandria on the former RF&P mainline (now relocated to what would have been the east side of the yard) you will see a few buildings including (two big box stores) on the land the yard once occupied. Most of the land is still undeveloped and with the downturn in real estate it will take some time before the remaining land is developed. I just wonder how many people in CSX and NS operating department wish they had that yard back? 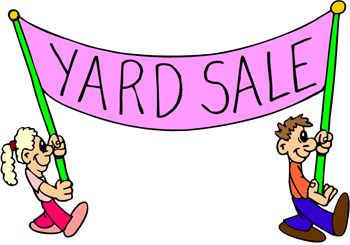 Graphic, Lansdown on the Potomac