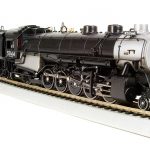 By the 1990’s OMI (Overland) would virtually have the modern brass diesel model market cornered. If there was a new prototype on the rails, OMI would soon have a model of it. This was also the time when the quality of the detail on brass models would surpass anything that was previously built. But so did the price! The result was that some builders began to see their models as fine scale replicas. This increased the price considerably. For example, Key, who had previously imported a model of the C&O Railroad’s popular Allegheny steam locomotive (2-6-6-6) at the already considerable $1,500 price range now came out with one in their new Bench Mark series for $2,800!

At the same time, W&R, another premier importer, was getting over $3,000 for some locomotive models. Even with the good economy of the late 1990’s, these models were now out of reach for many modelers. The models looked and ran super, but, at these prices, the majority of the models were purchased by collectors and serious, well to do enthusiasts. Most of these models would never be run and would end up as display models, while some were never even taken out of the box.

With the cost of brass now becoming more and more prohibitive to the average modeler, just after the 1990’s some importers began to either cut back on the numbers of imports or shut down altogether.

Today, the cost of an HO brass diesel locomotive has nearly doubled since the middle 1990’s to just under $1,000, while almost all brass steam locomotives have exceeded $1,500 in cost.

Proto to the rescue! By the late 1990’s Proto 2000 saw the handwriting on the wall for brass steam, just as they did for brass diesels. The Proto 2000 team went to work on their first steam project, the N&W Y-3, 2-8-8-2. Based on a USRA design, the Y-3 was built by the N&W in their Roanoke Shops. This meant the N&W Historical Society would have all the technical drawings of these locomotives. The Proto team made numerous trips toRoanokein order to get an accurate model. They also teamed with Roco, a European company that had been building highly detailed European plastic steam locomotives for decades.

Finally, Proto took a page from Rivarossi, by making both sets of drivers articulated. This would allow the Y-3’s to negotiate 18” radius curves. The model was released at a cost of about $320, well below Precision Scale Models’ $2,000 for the same locomotive.

The revolution that Proto 2000 started would soon spread. Now all of the older plastic manufacturers have embraced the standards that Proto started. It has also opened the door for new manufacturers to come online. Both the old and new are producing all plastic models, as well as hybrids of die-cast and plastic and some with brass and plastic.

Athearn, Atlas and others have been joined by Broadway Limited Imports, as well as the well known O gauge manufacturer MTH, in the production of new HO high quality models adopting this hybrid concept. This revolutionary innovation that Proto initiated has spread to the electronic end of the models. Sound, smoke and DCC are now offered as standard features in both the plastic and brass models. Though adding somewhat to the cost, these fabulous features enhance the operational enjoyment of these models and are well worth it.

Both Lionel and MTH got into the HO market in the early 2000’s. Lionel started big with a UP Challenger and a UP Veranda Turbine, while MTH started more modestly with a PRR K-4. Today, Lionel has left the HO market, but MTH has stepped in, and in a big way. MTH has expanded its line with diesel, electric, and steam locomotives including an Erie / Virginian Triplex, 2-8-8-8-2 in 2007. MTH often uses die-cast boilers and separately added on detail parts, including some piping on their steam locomotive models. This made their model comparable to the other non-brass manufacturer’s models. Awhile back, MTH released a UP 4-12-2 steam locomotive and a Little Joe electric locomotive.

Moreover, the used brass market has been a good bet for many. There were some good to very good models made during this time, as well as models of locomotives that have never been reproduced since. Such models as NJ Custom Brass LV 4-8-4 and OMI Central of Georgia 4-8-4 “Big Apples” are just a few of these one-time-ever runs. And these are only the beginning of a very long list of brass locomotives that were imported at that time and may never be reproduced again. For the more experienced modeler, one could take these models and upgrade the detail, drives and electronics to bring them more in line with today’s models. The 1960’s through the 1980’s produced hundreds of brass models by several importers. Most were of very good quality that can easily be incorporated into today’s higher standards of models.

Next time: Things you should know about Brass