Recently I overheard a comment from a local modeler: “Brass locomotives are nothing but trouble.” He then went on to say that the older brass models not only ran poorly, but also did not look very good!

I want to take issue with these comments because, this was not the first time I have heard these complaints. When I was working at Orange Blossom Hobbies this topic was brought up several times by customers and even dealers.

In order to comment on the early brass models of the late 1950’s through 1970, we must first have a look at what was available in the non-brass market of that time. Mantua and Rivarossi were the major producers of HO non-brass steam locomotives from the 1960’s until the late 1990’s, and in the 60’s Athearn produced some plastic diesel locomotives.

Rivarossi steam locomotive models basically looked OK, but their running qualities left much to be desired. These models did a pretty good job appearance wise in representing particular prototypes, however they were notorious poor runners at slow speed.

Rivarossi locomotives would stand still with their train while you applied power to the track then jump to a moderate speed – not at all typical of a prototypical start. Another thing that hurt Rivarossi models was that they were built with deep European style flanges. This would limit their use to Code 100 track. Eventually, in the 1980’s, they changed the wheels so they could run on Code 83 track.

Steam locomotives built by Mantua ran better but lacked everything else. First of all, most of their models did not resemble any particular prototype, and they had no detail whatsoever.

On the diesel side, early Athearn locomotive models ran OK once they replaced their rubber band drive with gears. By and large these models looked OK too. However because they used oversize of motors, the cowlings on the hood unit locos were too wide. This made their GP-9, GP-35, SD-45, and other similar models out of scale. They did not correct the problem until the 1970’s when they released their SD40-2. Now with a new motor with flywheels, this enabled Athearn to use a correct width hood for the first time. Athearn did produce a few steam locomotives for a very short time in the early 1960’s; these models were similar to the Mantua line and did not sell very well.

Taking this brief background on early non-brass models into account, the brass models of this time had several advantages over their non-brass counterparts. First of all, they were accurate reproductions of specific locomotives. This was the time that most brass locomotives were hand crafted in Japan. PFM (Pacific Fast Mail) was importing locomotives from Tenshodo. Other well known companies like Gem (Ruby Line) and Balboa made some good models too. By and large, all these models were state of the art for that time.

They had good detail, they had good pulling power, and they ran very well. Each subsequent model would be an improvement over the last. The brass importers were always looking for ways to upgrade their models over the last run that was imported. This could not be said for the mass produced models. It took Athearn over 10 years to make its changes, Mantua did not change for many more years, and Rivarossi did not improve their drive systems until right before they were sold in the 90’s. Today all three manufactures’ models are much improved, but, like all the early mass produced locomotives, it took them up to three decades to make the upgrade.

By 1970 brass was well on its way and starting to enter the time of its strongest popularity among serious modelers and collectors. As models began to come in with better drives, the can motor became the standard at this time. Coupled to this new motor were better gear units. This would allow for much smoother running locomotives. There were now nearly a dozen importers bringing in numerous new models every year. This was also a time when brass was affordable, and the average modeler had the money to spend on them

My first brass steam locomotive was purchased at this time, a Westside Models PRR K-5 for $150.00, the model had a can motor, ran very well, and had good detail. This was soon followed by a WSM PRR J-1 for $250.00. This model could pull 40 cars and it looked great. Across the board, model railroading was entering its heyday and so was brass. I was now finding myself every payday down at Orange Blossom Hobbies putting something down on a brass lay-a-way. 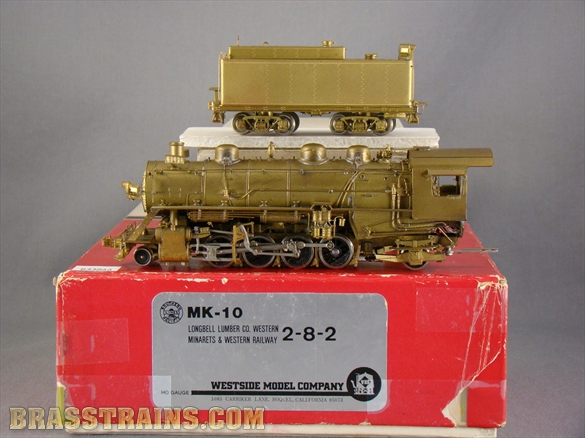 A Westside model of a Southern Pacific MK-10
(from http://www.brasstrains.com/)

However, there was one area brass did fall behind, and that was in their diesel and electric locomotive offerings. Some looked OK but almost all did not run well. This did not change until ALCO/Alpha Models started to use Samhongsa as a builder. With their new drive, all their wheels were geared and powered by a can motor. This gave diesel and electric brass models the ability to compete with their plastic counterparts, whose manufacturers were now producing better running, and better looking models.

Once the drive problem was solved for brass, the number of electric and diesel models increased dramatically. In 1976 Overland Models would enter the fray. Overland is an importer of various models of all three types of locomotives; however, OMI would soon take the lead on importing brass diesel models. By this time other quality importers would enter the market such as Key and Challenger. Also at this time ALCO models would become Alpha Models.

By 1989 a new concept would occur in the plastic market. Life-Like Products, a long time model railroad company who mainly specialized in scenery products, started a new division: Proto 2000. What was new about Proto 2000 was their diesel locomotives would be built with the detail of their brass counterparts, but in plastic. All their models would have separate detail parts that were added on, not cast into the plastic shell. Their first model, a BL-2, showed the model railroader that brass quality could be achieved in plastic but at an affordable price. By the early 1990’s brass prices were getting higher. Though they were not out of reach yet, it was becoming harder and harder for some modelers to afford them. The Proto 2000 concept also allowed a modeler to buy a specific model in multiples. For example, a single GP-9 in brass could run as high as $500 at this time while the Proto 2000 version would be in the $50 – $80 range. This meant a customer could now purchase 8 to 10 models for the price of one brass model. Proto 2000 further capitalized on this by releasing models with multiple road numbers. 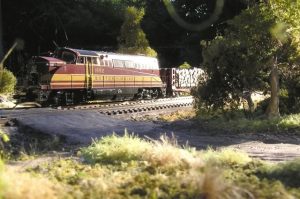