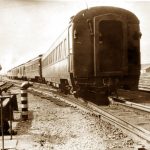 If I ever look to a starting point of why I love trains so much I must place that on a small town on the New York / Pennsylvania state line. Sayre, Pa. was the main shop facility for the Lehigh Valley Railroad. Here both heavy locomotive and car repairs were done. Nestled in a valley with sister towns Athens and Waverly, it was a natural location for the valley to locate its main shops; it was halfway between New York City and Buffalo, NY.

Sayre became a legendary Mecca for railfans in the 1960’s and 1970’s. Its pedestrian walk bridge went right over the locomotive service tracks, giving photographers an unobstructed view of any locomotive on the ready tracks. The bridge also traversed the south end of the yard’s ladder tracks as well as the main line. This allowed for a great overhead view of any switching activities and of trains arriving and leaving Sayre. In the mid-1970’s Sayre attracted many a railfan seeking to photograph the numerous different paint schemes that were applied to Valley locomotives. But nothing would bring out the fans more than when the D&H began to run their two Baldwin Shark nose units in the daytime on the Sayre turn from Binghamton, NY. 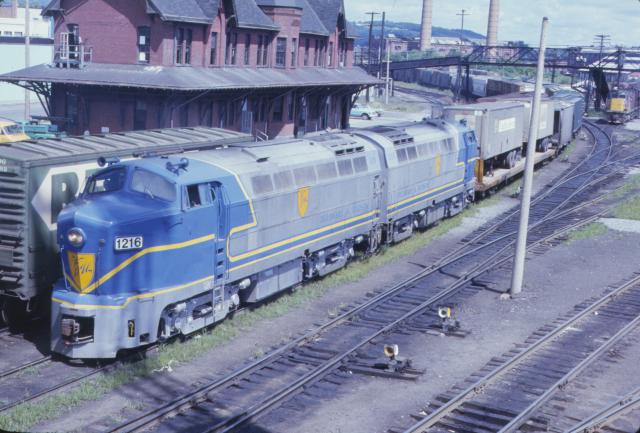 Sayre, PA Railyard. In the background you can see the pedestrian walkway.
Photo from the Jay Winn collection http://www.bridge-line.org/blhs/BaldwinSharks.html

The reasons for my journeys to Sayre began even before I had any recollection of them. My parents lived and worked in Auburn, NY. My mother and father would often take trips down to Sayre to visit my mother’s parents and brothers. Her brothers as well as her father all worked for the Valley, and they all lived within a block of the railroad yard. I was still very young at this time, under one year old, but these trips would set the stage for later trips, the ones I do remember, up from Hollywood, Florida.

My Uncle Louis and Aunt Eileen lived with my grandfather in his old house (built by the Lehigh Valley and sold to its employees) on Elmer Ave. The yards were located on Lehigh Ave., one block over.  My grandmother had passed away soon after we moved to Florida in 1955, but my mother and I soon began a yearly summer pilgrimage back to Sayre so she could visit her father. We would arrive on the Black Diamond in the afternoon, coming up from Florida on an SAL or ACL train, transferring in Philadelphia to a Reading train to Bethlehem and boarding the Diamond there.

My indoctrination into the Lehigh Valley was brought about by my grandfather who loved to gather up all his grandchildren, and take us down to the corner to watch the Black Diamond pass by. This soon grew into me pestering my mother to take me out to that same corner so I could watch trains; I was still under 6 at the time. As we made our rounds to visit friends and relatives, I would always spend as much time as possible out on the front porch as that location allowed for a good view of the railroad yard. My Uncle Ted (Zeek, as everyone called him)  lived right across the street from the yards. Needless to say, I spent many an hour on his front porch. However, this brought much dismay to my mother who said I needed to spend time with my Aunt and Uncle. There was always a disagreement at Uncle Zeek’s!

There were so many interesting sights and sounds that surrounded that yard, least of which was the constant sound of trains being switched at all hours of the day and night. The banging of cars being coupled or the sound of slack being removed from a long train pulling out, became as much a part of my memory as watching the trains themselves. Most of all it was those tall floodlight towers that brought a new dimension to those early images of a working railroad yard. The sight of the entire yard illuminated was very exciting for a 5 year old train buff. But of all those sights and sounds, the object that will always be a symbol of the Lehigh Valley in Sayre was the twin stacks of the boiler house. No matter where you went in the valley, they were most likely to be visible.

By the time I entered the 3rd grade in1962, my Uncle had moved his family out of the house on Elmer Ave. to a place on Pennsylvania Ave., about two miles from the railroad. This became a real disadvantage to my train watching, however, when there was a need to go into town, I would always volunteer, especially when it was a trip to the grocery store on Lehigh Ave. Needless to say, I would stay outside near the store’s entrance, that location provided a perfect view of the yards. The other sad part of this time was that the Valley no longer ran any passenger trains; that meant a bus trip from Washington DC. Also, this began the time when the LV started to receive its first locomotives painted something other then Cornell Red: the gray, yellow, and red Alco C-420, or as they became to be known, “The Yellow Jackets.” They were soon followed by the white, black, and red Alco C-628, or “Snowbirds,” or as the employees referred to them, “White Elephants!” 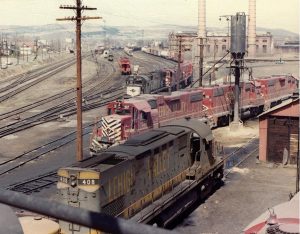 The 628’s were the largest diesel locomotives the Valley ever owned, however, the crews didn’t like them very much due to their poor tracking abilities and their reliability, hence the name White Elephants. They were, however, very popular among photographers; both the white and later the red paint scheme made them a very attractive subject.

The arrival of the newer power meant an end to all those beautiful cab units, FA & FB, PA and those EMD F units. The Valley held on to many of its older cab units a lot longer than most railroads; this had a lot to do with the fact that they did not have the cash to purchase newer power. The Valley even got some F units that the PRR no longer needed. In fact, a few of the cabs hung on into the early 1970’s. Of all the cab units, it was the PA’s that were always the big favorite among railfans and the most missed. I can still remember a pair of them pulling into Sayre on our eastbound Diamond, and in later years seeing them in Sayre on freight trains. However the PA’s were a passenger locomotive and they belonged on the point of the Valley’s passenger trains. It was a sad day when that service came to an end. 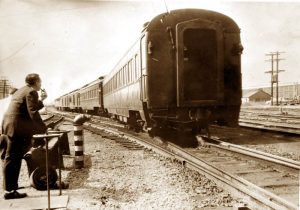 Next: Sayre, the later years