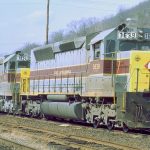 The LV was not the only railroad that ran through the Lehigh Valley. In Waverly, New York, the Erie and the DL&W main lines ran through the town, each road having a station there. By 1960 these two railroads merged, and the Lackawanna was abandoned in favor of the Erie tracks. By the late 1960’s and early 1970’s the Erie Lackawanna ran many trains behind some of the newest and largest locomotives built at that time. The gray, yellow, and maroon paint was just as interesting as the rainbow colored Lehigh Valley’s locomotives were. U-33C, SD-45, SDP-45, and SD-45-2 were some of the power that would frequent Waverly on a daily basis.

In December of 1965 my mother decided to visit her father for Christmas along with me. This time we were going all the way by train; the SAL Silver Star from Hollywood to Newark and the EL Lakes City to Waverly. Wow! I had never had the chance to ride the EL, and this sounded like a real treat. The only problem was that it was winter, and it was the Northeast, and it was dark. I did not get a chance to see any of the EL on the way to Waverly and only got a short glimpse of it on the return, that whole “night train” thing. However I do remember the Lake City pulling into Newark with a very long assortment of headend cars; it was Christmastime and the mail was very heavy.  I am really glad I had a chance to ride the Erie Lackawanna’s Lake City; it was a faster version of Seaboard’s Palmland. 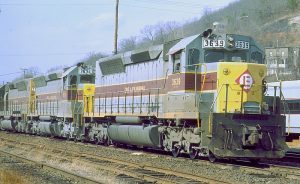 Photo by Steven Kay on railpace.com

My next to last trip to Sayre was in the summer of 1973. I was now a full blown railfan complete with a camera, and six weeks to watch trains in. The trip also marked my first experience on Amtrak’s Silver Meteor and my first trip into New York City. My uncle Zeek was now a car shop foreman, and he wasted no time in offering me the grand tour of “his” car shops, however, I had to listen to him tell me how he was single-handedly keeping the Valley’s freight car fleet running. It was a great tour, and I finally got a chance to see what was on the other side of all those tracks. I also found out that there was a very nice model railroad and club at the old Muldoon school house in Waverly; they also were of great assistance on railfanning the area, for I had no car, and they did. The highlight of the trip was one afternoon when my aunt dropped me off at the walk bridge. After a long and boring period of no trains, I heard an air horn coming from behind me, a location that had nothing to do with the mainline or yard. I turned to be totally surprised by the sight of a Delaware & Hudson U-33c on a fairly long train, 89 cars that day. This would be my first and only encounter with what JJ Young Jr. would later write about, “The Owego Connection,” in Railfan magazine.

I missed the D&H Sharks by one year, and the U23b, but most of all I would never see the Lehigh Valley Railroad again. My father was planning a trip in 1975 and asked if I wanted to go along, however the trip never materialized. I did return to Sayre one last time, back in 1989. I was with JMJ Productions and we were shooting in and around Binghamton, NY, with JJ Young Jr. We were concentrating on the Susquehanna Railroad operations on the former Erie Lackawanna and Delaware & Hudson trackage. We had planned to shoot the old Southern tier line of the EL for a couple of days and thought it would be a good idea to go into Sayre. I asked JJ about what was going on in there. He told us, “I will not go back there, it is just too hard.” By this time the big shops, the powerhouse and twin stacks had all been removed. The yard was full of cars needing repairs in the car shop that now was owned by North American Car. I could see what JJ was saying; it was very difficult to view.  We went to dinner at a very special Italian restaurant on the east side, Mangialardos; the food was still great. We finished our meal, and then we left without ever taking our cameras out!

I still think of those trips a lot, wishing that the Lehigh Valley and the Sayre of that time still existed. However, the old saying comes to mind, “all things must end,” and that time did indeed end.  I hear rumors that the Norfolk Southern may do a series of “heritage railroads” paint schemes on some of their new SD 70M-2’s, including a Lehigh Valley version, but that rumor first appeared in 2006, and it’s now 2011. Not only has Sayre changed but so has the entire Lehigh Valley changed. Sayre is no longer linked to either Buffalo or New York City by former LV rails. The main contribution the LV gave to Conrail was its yards, Oak Island and Allentown. The latter was originally a CNJ yard that the Valley took over in the 1960’s. Even the great Bethlehem Steel Works are now gone, as well as all those anthracite coal mines and the countless branch lines that served them. They are all now just a part of our memory!