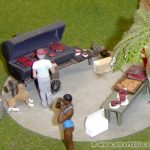 What’s more fun in the summertime than a enjoying a backyard Barbeque and a cold beer? The answer: building a model version of a backyard BBQ in the scale of your choice. For me, I’m referring to one of my favorite projects, a miniature BBQ diorama, built 7 years ago in O scale for a Christmas display layout SMARTT created for the Aventura Mall here in south Florida. Let’s look at the BBQ and how it was built.

The BBQ was part of a vignette for a picnic area on the “Aventura Station” layout. It consisted of three grills: two were store bought Arttista items, and the third, a smoker, was scratch built. The same technique used in O could be applied to other scales. The Arttista grills are cast in the closed position, and can’t be opened, so to do something more elaborate calls on your scratch-building skills. 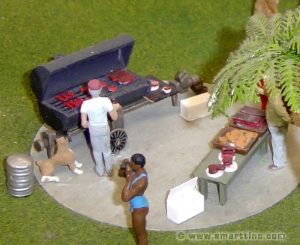 For the smoker, I used a small Walthers HO plastic tank that was rounded on both ends. I then cut it in half lengthwise. This gave me a top and bottom to the smoker. The next step was to fabricate three hinges from evergreen strips; I used them to hold the top and bottom of the smoker together. On the top half I attached a small cylindrical vent to the middle. The last step for the smoker was to fabricate the grills. I used two fire escape railings from my odds and ends box and attached them to the bottom half. Though I did not do this, you could add small sized coal below the grills to use as charcoal. To simulate a charcoal fire, paint them shades of red, white, and black-gray.

This type of smoker was mobile, so I placed it on top of a two wheel trailer. I believe the trailer was also from Arttista. If you can’t find the right size trailer, try scratch building one with two wheels and some Plastruct I beams. Simple enough. You can easily build a permanent grill by using a smaller tank and placing it on scale cinder block or brick. Or you can build the whole thing as if it was built from brick. 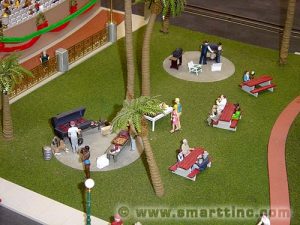 Overall view of the BBQ and the surrounding park

Now you are ready to cook up a feast. This was the most enjoyable part of the project. Nothing like making O scale hamburgers, hot dogs, steaks, and ribs – only 1/48th the calories!

Other details we used for our BBQ scene included two Berkshire Valley  oil bottles, one painted red for Ketchup, and the other yellow for mustard. There are cases of soda, a keg of beer, picnic tables, and lots of hungry people. Like all detail work, it is always easier working in the larger scales, but don’t get scared off if you work in HO, for it is definitely doable. For those modeling in N & Z, however, good luck – my eyes aren’t that keen anymore!

This is a really fun project and one the family would love to get involved with. Face it, who doesn’t love a BBQ. For an additional project, several years ago while I was filming on the Clinchfield Railroad in Tennessee, we came across a work train sitting on a siding. On the large back platform of an old L&N transfer caboose was a small BBQ that the crew was using to cook lunch on. Let me tell you how hungry that made us for BBQ. We left there in search of a BBQ restaurant, unfortunately to no avail. I wonder if we have an old transfer caboose sitting around the shop -it would make a good project. As for our hunt for a BBQ that day, we ended up settling for McDonalds’ McRib’s. For those of you who may be wondering – what was an L&N transfer cab doing on a Clinchfield work train? It was about a year after CSX took over CC&O.

Another day, we will look at the beer side of summer and how you can build your very own brewery. 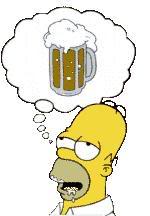 A model brewery that is! “Mmm beer….”