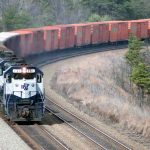 Back in the 1960’s, railroads perfected the concept of trains carrying a single commodity from point A to point B. This allowed railroads to speed up delivery time by eliminating switching, the assembling and disassembling trains at railroad yards. These trains would start at a processing point, such as a coalmine and proceed to an endpoint, which could be a power plant or a rail-to-water facility ( in relation to coal transport). But coal was not the only commodity moved by rail in unit trains; everything from automobiles to corn are now carried by unit trains. 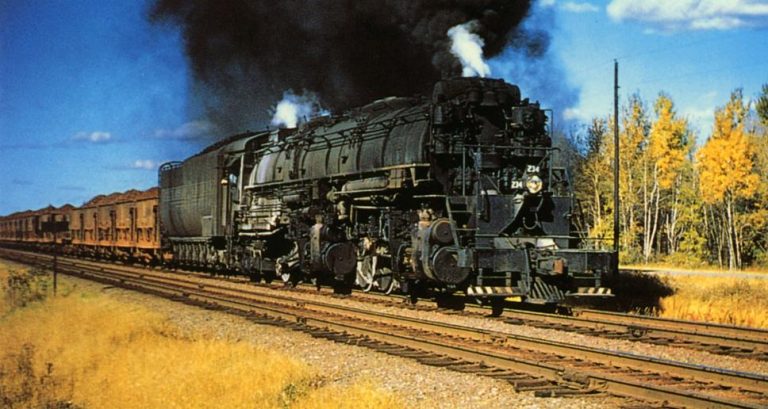 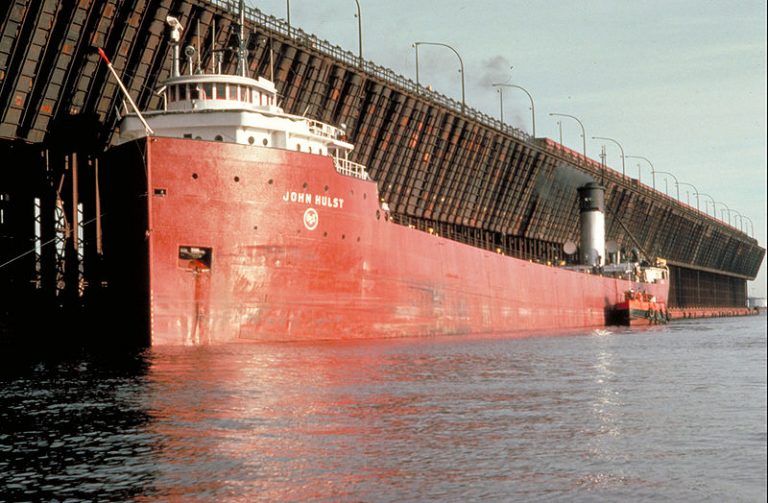 A Lake Superior ore dock with the ore boat John Hulst, note the ore jennies at the end of the dock, photo, Wikimedia.org.

Let’s first take an historical look at railroads moving a single cargo by rail. What first comes to mind is those long strings of iron ore jennies (shorter open hopper cars) pulled by 2-8-8-4 Yellowstones on the Duluth, Missabe, & Iron Range Railroad. Here, the DM&IR moved long strings of jennies from the Missabe iron range open pit mines to the ore docks on Lake Superior.  This operation is a prime example of a steam-era unit train, however, that term was not part of railroad jargon of the time. LCL trains, Less than Carload Lot, would move in a dedicated train from one point to another. This was mostly done by the largest railroads from one large city to another. Prime examples of this were the Pacemaker and Merchandising services provided by the New York Central and Pennsylvania railroads respectively. These trains would move LCL trains between New York and Chicago at an expedited speed. However, as trucking companies such as UPS made inroads into this market, the railroads could no longer compete, and thus discontinued the service in the early 1960’s.

A long BNSF doublestack train is running at track speed through the desert. No fewer than 80 platforms carrying 160 containers are visible in this photo. These trains reach speeds of 70mph, photo wordpress.com

Today we see numerous types of unit trains on the railroads, container trains being no exception. Here double stack and Roadrailer technology have revolutionized the movement of containers on the rails. Some of these trains move long strings of double stack containers from West Coast ports to East Coast ports, Maersk and China Shipping being two examples of such shipping services. Here, 100 railcar platforms carrying two hundred 40’, 48’, and 53’ containers form a land bridge that cuts weeks off the shipment of merchandise from Asia to Europe. Containers are stacked one on top of another, giving the railroads double capacity per car. Others deliver overseas cargo to inland cities not having accesses to the ocean shipping.

Roadrailers are another example of today’s innovative approach to container-to-rail technology.  Here, highway trailers are fitted with a railroad truck that is placed under the rear end of the trailer. Perfected by the Norfolk Southern Railroad in the 1980’s, these trailers’ height gives the railroad a low profile (that creates less wind resistance) and makes for a lighter unit train. This is accomplished by eliminating the heavy platform car that is normally used to load containers and trailers onto. 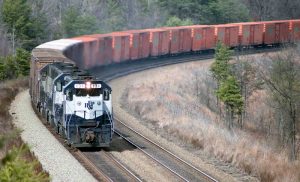 The “Juice Train” on the RF&P railroad. Notice the distinctive look of the refrigerator cars. This must surely be a hard train to miss, photo by trainweb.org.

Other commodities that are transported on unit trains include coal, coke, automobiles, wheat, corn, fruit juice, plus petroleum products. One of the most unique uses of a unit train is by the Tropicana Juice Company. Back in the 1970’s Tropicana began shipping orange juice from their processing plant in Bradenton, Florida to their distribution facility in Kearny, New Jersey.  A unit train of 70 insulated refrigerator cars, all loaded with orange juice, would leave Bradenton every three days for the trek north. The train was dubbed “The Juice Train”, and was very easy to identify by its brightly painted refrigerator cars lettered Tropicana. Today, the “Juice Train” still rolls on, and has even expanded to other points north and west.

Coal was a major bulk material carried in unit trains. Long strings of coal hoppers left the coal fields of the US and headed for mills, power plants, and rail-to-water transfer docks. In fact it was the movement of coal that spearheaded the move toward unit trains back in the 1960’s. Coal coming out of the Powder River coal fields in Montana and Wyoming, would feed power plants as far away as Georgia. These trains would not only go from point A to point B, but would operate on several different railroads, sharing power from each railroad. A train could arrive in Georgia with locomotives of the C&NW, UP, and Southern.  But as the steel industry shrank and coal fired power plants converted to natural gas, the number of coal shipments in this country has been reduced by more than half. Rail lines that once saw twenty trains a day are now seeing as low as a single train in three days. Only the export coal business has remained positive, but that faces problems as Europe converts to cleaner energy.  Legendary divisions such as NS Pocahontas and CSX New River line are converting to other freight, such as double stacks.

Today the railroads are standing at the dawn of a new era for the unit train, as new oil fields open in the Dakotas, an area where pipe lines are non-existent. Railroads are capturing the bulk of the shipments from the oil fields to the refineries. Add to this the fact that getting new pipelines approved is becoming very difficult, the Keystone XL being a prime example. Also, the expense involved in building pipelines is becoming higher and higher. These factors are making transporting crude oil by rail more economical to the petroleum industry. 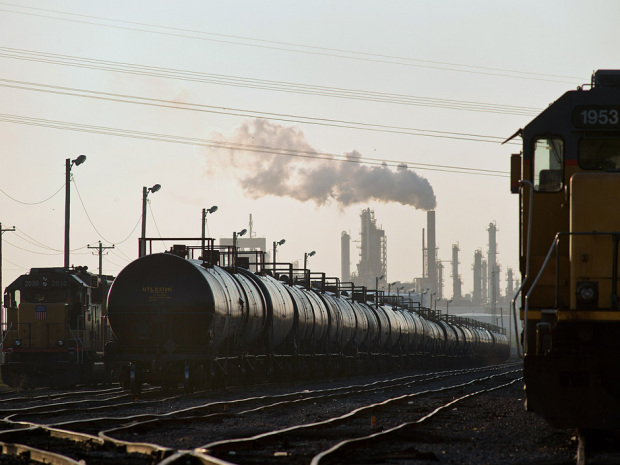 The railroads and the petroleum industry are becoming more and more interdependent on each other.  This will bring more and more unit tank trains on US rails over the next decade. Many in the railroad industry feel that even if the Keystone XL pipe line is built, it will not take any business away from them, photo financialpost.com.

Going back to the 1960’s, GATX, a company that built and leased railroad cars, including tank cars, unveiled the “Tank Train.” The tank train was an interconnected series of tank cars joined not only by couplers but also by pipes. This allowed for faster loading and unloading of the cars. Today, the railroads have a backorder of 60,000 tank cars. BNSF car loading of crude oil jumped from 41,000 units in 2011 to 154,000 units in 2012. Already in 2013, crude oil shipments are up by 49% over last year; this is partly owing to the railroads’ flexibility over fixed pipe lines. Heavy crude oil does not have to be diluted when transported by rail. That is not the case when a pipe line is used. Shale and tar-sands oil is too thick to be pumped in a pipe line, and it must be diluted in order to flow freely.  That also means the diluents must be removed at the refinery, adding to the cost of refining the oil. The shipment of crude oil by rail could offset the loss suffered by the reduction in coal shipments. The railroads and their unit trains have and will continue to change transportation in North America.

More on Unit Trains next time!