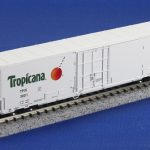 Modeling unit trains is very easy; most cars used in unit trains are available as ready to run models. Many manufactures offer these cars with multiple numbers, or include a small decal sheet so you can number the cars yourself. The only restrictions that will apply are cost; ready to run cars are expensive, up to $50 per car and the size of your layout. You don’t want your locomotives chasing the end of the unit train they are pulling on a small layout.  However, never have model railroaders had such a variety of rolling stock available with which to build impressive unit trains. Let’s break down what is available in today’s market for unit trains.

Walthers offers an enclosed auto-carrier in several different road name and numbers. A unit train of auto-carriers does not need to be from one road name. Usually cars from every currant railroad will be included, plus some fallen flag equipment can be used as well.

Accurail offers semi-enclosed auto-carriers. They used to offer open auto carriers for those who model the 1960’s-1970’s. The disadvantage of using open auto-carriers is that you would need a lot of autos to fill them, an expensive venture.

Atlas had an articulated auto-carrier, but I don’t see it in this year’s catalog.

Accurail offers both two and three bay hoppers. The two bay hoppers were few and far between by the 1960’s as far as coal service, however, I remember seeing a Virginian hopper in a NS coal train in the late 1980’s.

Bowser has plenty of hoppers in many road names and numbers. For you PRR fans, they make nice H21 and H21a hoppers, plus a coke hopper.  Stewart-Bowser makes a 70 ton hopper in both 12 and 14 panel configuration.

Atlas has a nice three bay hopper with peaked ends.

Boswer lists several different Roadrailers on their web site. None are in stock, but they are taking pre orders.

Walthers has 69’ Gunderson Husky Stacks plus numerous containers, but no articulated 3 or 5 car sets. They also offer Front Runners, but no TTX pig flats.

There seems to be fewer intermodal cars available at this time, check eBay, on line, and local hobby shops for the earlier releases.

The big news here is Athearn, who is releasing  an updated version of former Roundhouse models Tank Train tank cars at $49.95 each and a two cars set at $99.98.

Walthers, Atlas, and Athearn all offer tank car models that are used in today’s unit tank trains. Many of the cars that are available are of the new funnel flow style. This type of car’s tank bows inward from each end towards the center, allowing for quicker unloading.

Walthers, Athearn, Atlas, and Accurail all make hopper cars, and center flows that will work well for unit grain trains. Unit grain trains have the greatest variety of equipment among unit trains. If a hopper car can be safely cleaned to carry grain, it will find its way into a grain train. These trains are also the most colorful; cars of many different railroads, including regional, and shortline grain haulers, as well as privately owned cars bearing the names of large corporations such as Cargill and ADM appear as part of these trains.

There are a few different manufacturers making the Tropicana cars discussed last time.

Lionel made an O gauge version of the car.

Bachmann and Red Caboose made the car in N scale. Both the HO and N scale models were available in multiple road numbers. 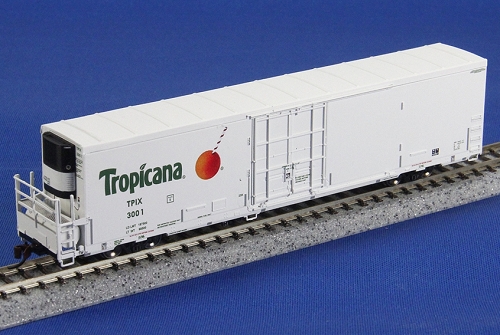 As you can see, modeling a unit train is very easy with almost all these models being RTR (Ready to Run). No longer does a modeler have to spend weeks building a repetitive series of cars and then making sure that each car has a different number. I remember building a 50 car Southern railway unit coal train using Roundhouse Models kits. Each car had different numbers, coal loads, and weathering. I also used one of Overland Models’ Southern Railway Radio Control car with mid train slave locomotives (see our story on the Rat Hole about Southern’s master/slave locomotives), as the power for that train.

For those who modeled steam, unit trains were not yet part of the railroad lexicon, but one would see solid trains of coal, refrigerator, and LCL cars. In fact the PRR, B&O, and NYC all had specific names for their LCL services, Merchandising, Sentinel, and Pacemaker respectively, and they would run trains comprising only those cars. Over the years, many of these cars have been available in all scales by various manufactures, giving steam era modelers the ability to create their own version of a unit train.