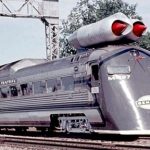 When a Train Became a Jet – The World’s Fastest Trains!

The first part of the above quote is from our January 2012 newsletter. It was in reference to the Pan Am Railroad’s (formerly Gilford Transportation) repainting one of their former Main Central GP-9 units back into its 1970 era paint scheme. The second part refers to a New York Central RDC-3 that was equipped with a jet engine from a B-36 bomber aircraft.

The railroad dubbed its new creation the Black Beetle. The M-497 (RDC-3) was modified to see if existing railroad infrastructure (including jointed rail) could safely handle high-speed trains.  The project got the go ahead from NYC RR president Alfred Perlman, an unlimited budget, and a 30 day time completion date. Under the direction of Don Wetzel, assistant to the director of technical research for the New York Central, the project was built at the railroad’s Collinwood backshop in Cleveland, Ohio. With only the shovelnose cowlings being built new, all the other components were second hand, railcar and jet engines, basically a 12” to the foot kitbash. Other modifications included 50 instruments to measure speed, bearing temperatures, and stress. The standard tapered-tread wheels were replaced with cylindrical treads. 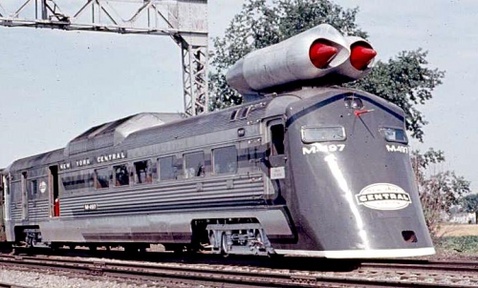 With some of the backshop workers working through their 4th of July vacation period to complete the project, the deadline was reached.  On July 22, 1966, the M-497 was towed out to Bryan, Ohio for the test runs. Saturday July 23, Don Wetzel was in the cockpit of the M-497 with a jet pilot helmet over his head. The line chosen for the test was a 68 ½ mile tangent (between Stryker, Ohio and Butler, Indiana) with all of only 4 miles welded, the other 64 ½ miles were 127 lbs joined rail.

On that Saturday the M-497 hit a top speed of 183.85 mph, a record that still stands today in the United States. A film was made both from the ground and in the air of the record setting run. After the historic run the M-497 was brought into New York City by way of a NYC cross harbor carfloat and tug. There at the NYC 60th street yard a press conference was held. The M497 was sent to the railroad’s Beach Grove shops in Indiana to be disassembled and made ready to return to its old job in regular commuter service. As for the jet engines, the NYC adapted them for good use by modifying them for a special jet powered snow remover, or as they called it, the Snow Jet.  Today other railroads have adopted the same principle. 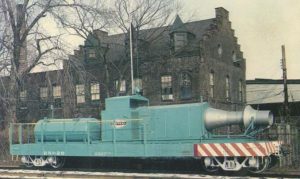 Apparently there was a wealth of very good data received from the test, accordingly to Don Wetzel but little came of it. Soon the New York Central would merge with the Pennsylvania railroad to form the Penn Central railroad. By 1969 and with the support of the Department of Transportation, high speed trains, The Metroliners, began to run on the PC New York to Washington main line.  The Metroliners ran on electric power distributed by overhead wires built by the PRR in the early 1930’s. There was no modification to the track or roadbed other then welded rail, much of which was installed earlier for regular passenger and freight operation. To this day Amtrak runs on this line with only modest improvements to the track and roadbed. The most noticeable improvement was extending the electrification though to Boston. This is the only high-speed rail line in the United States. Top speed does not exceed 150 mph with the average speed being 70 mph.

There was one other attempt at a jet powered train, this time by the USSR. They installed two jet engines from a Yakovlev YAK-40 on one of their versions of a self propelled passenger car. They called their variation of a jet propelled railcar the Turbojet Train. Built in 1970, the Turbojet Train reached a top speed of 160mph. Here the US won over the Soviets again, this time in the great train race (remember the space race, and the arms race). The Turbojet Train was 25mph slower than the M-497. Unlike the Americans, the Soviets had plans of adding jet engines to boats and buses also! However, we did experiment with the possibility of powering trains with nuclear reactors: atomic locomotives. Can you say “Dah svee-dah-nee-yah!” 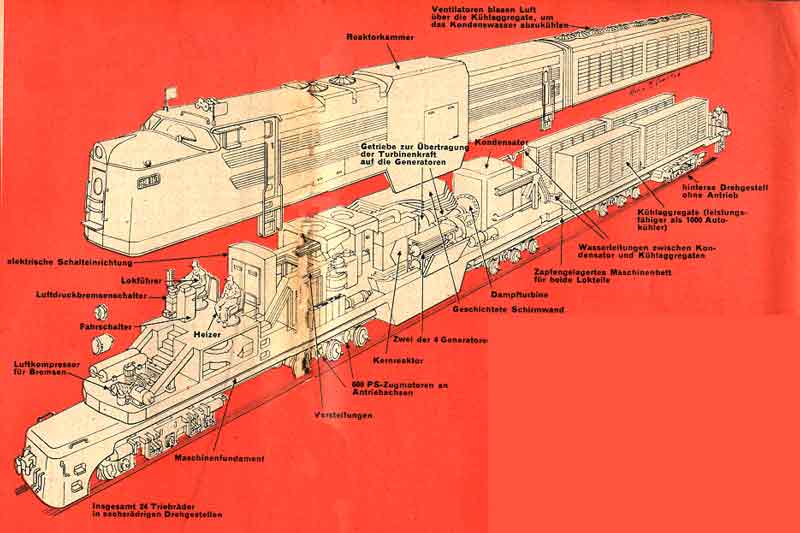 Atomic Locomotive, the writing looks German but the locomotive lines
and hardware (couplers) are American. Image from Fastestlaps

In closing, you know someone would eventually come out with a model of the M-497 and they did. Lionel not only released the New York Central’s M-497 Black Beetle (Lionel # 6-38401), but they also came out with a Rock Island version back in 2010. They later released an add-on car, (Lionel # 6-35481) something that never really happened; the M-497 ran alone.

Incidentally it was the New York Central Railroad that  first reached the century speed mark back in 1893 with 4-4-0 locomotive number 999. The high stepping American (86inch driving wheels) was specially designed to pull the NYC crack high speed passenger train the Empire State Express between New York City and Buffalo. On May 10, 1893, between Rochester and Buffalo on the Centrals tabletop mainline, the 999 became the first manmade object to travel faster than 100mph.The locomotive soon went on a national tour including the 1893 World’s Columbian Exposition in Chicago. The locomotive was retired in 1952, shortly after it reenacted its record breaking run. Today, New York Central 999 is on permanent display at the Chicago Museum of Science and Industry.

Also if you go to the museum be sure to check out The Great Train Story. This huge HO (1/87 scale) model railroad featuring the cities of Chicago and Seattle has 30 trains running simultaneously on 1400 feet of track.  This massive project involved SMARTT as the major sub-contractor. 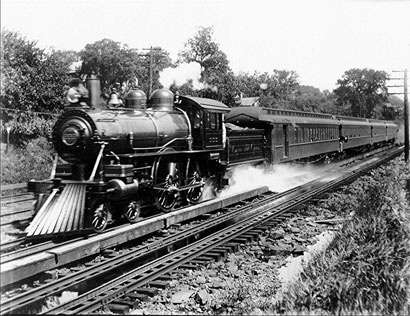