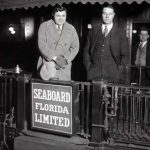 WHEN THE STARS RODE THE RAILS – PART 1: BASEBALL

Before the 707 made flying convenient, most celebrities would travel by the most luxurious conveyance possible, trains.  Railroads would not just brag about the accommodations of their passenger trains, but who would ride on them. Babe Ruth, Cary Grant, Rita Haywood, and others were all used as examples by the railroads as to why others should also patronize their first class passenger trains. Let’s take a look back and relive the golden age of passenger travel among those who were the stars of their time. 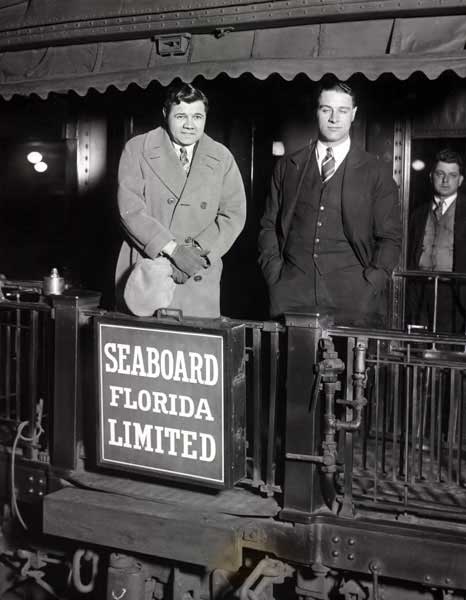 Major league baseball back in the days before jets was confined to the eastern half of the United States. Only two teams called locations west of the Mississippi River home. Both of those teams were literally right on the Mississippi River in Saint Louis: the Browns and the Cardinals. In fact 8 of the 16 teams up until the early 1950’s were in the Northeast. There were two teams in Boston – the Braves and the Red Sox; New York had three – the Yankees, the Dodgers, and the Giants. Philadelphia also had two teams – the Athletics and the Phillies, and the Senators called Washington their home. This meant the time needed to travel between the two furthest cites, Boston and Washington, would take less than 8 hours.

A western swing for an east coast team, let’s say the Brooklyn Dodgers, would look something like this: After finishing up a Thursday afternoon game, the team would board one of the Pennsylvania RR trains for Pittsburgh that evening.  Playing three games Friday, Saturday, and Sunday against the Pirates, they would move on to play a three game set with the Reds in Cincinnati. After finishing the Reds series they would board a B&O passenger train for Saint Louis. They would play 4 games in three days against the Cardinals, finishing with a Sunday doubleheader.   Once the doubleheader was over, it was back on a train bound for either Chicago or a return to Brooklyn. It’s no wonder baseball did not move to the west coast until the advent of the jet plane.

Baseball teams spent a lot of time in transit, but, as a Yankee Hall of Fame shortstop once said in an interview with Trains magazine several years back, riding trains brought players closer together as a team. You spent a lot of time talking baseball over dinner, cards, and drinks, something that does not or could not happen on a plane today. Three famous baseball movies (8 Men Out, The Natural, and The Pride of the Yankees) all had major scenes in which the interaction between players while riding on a train was depicted. In The Pride of the Yankees fellow teammates try to persuade the rookie Lou Gehrig to take a bit of a straw hat. He does, but it turns out the hat belongs to none other than Babe Ruth, played by himself. Teams took on more of an appearance of a family back then.

Railroads loved hosting baseball teams and loved to have baseball stars riding their trains. Many a railroad publicity shot would have a famous star of the day next to their flagship passenger train. However it was the Babe that was the most sought after of any star, movies or sports. In one photo, Ruth and Gehrig are standing on the back of the Seaboard Florida Limited’s observation car as they head south for spring training. 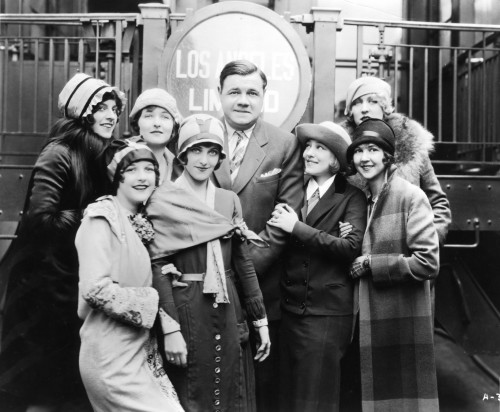 How can you incorporate baseball into model railroading? Many of the old and very famous ball parks and stadiums stood near railroad right-of-ways. The New York Central’s main line to Grand Central Terminal passes right in front of Yankee Stadium. Also there was a rather extensive coach yard near the old Polo Ground (NY Giants), as well as the Putnam Division’s bridge. The B&A did the same at Boston’s Fenway Park.

We’re always looking for something different to model, something unique; a ball park may be just the thing. I have always wanted to do a baseball park or stadium, but the size is definitely a major problem. Most baseball fields have dimensions of at least 300 feet at the shortest point, right and left fields, and 400 feet to center.  That means in HO scale you would need a space of 5’X5’, very prohibitive for the vast majority of us. In one instance SMARTT did model a scaled down Little League ball field using selective compression to make the scene work, but the ball-field module was still about 3 feet across in O-scale with HO figures as the Little Leaguers. The size constraint came from the three tracks the module sat between.

We could, however, model the outer façade of a stadium/ball park as a false front structure.  You can see in the photo of the polo ground how the back side of the left field bleachers stood right next to the NYC tracks. Also, how the NYC, now Amtrak, ran very close to Yankee Stadium.

In Boston, the B&A (New York Central between Boston & Albany) ran one street over from the back of the “Green Monster.” In the first photos below you can see a long straight area of the park that runs from the centerfield score board all the way back to the left field corner. This would include the back side of the Green Monster. Even though the B&A is on the other side of a row of buildings that are out of sight on the right, you could take artistic license and run the tracks next to the street. What a great back ground that would give to an urban setting; you could probably do the whole thing in a depth of 4 to 6 inches. You could condense the length down to 2 ½ to 3 feet if need be. Also take a look at one of the gate facades and see how that could also be incorporated into a false front structure.

Even if you’re not modeling New York or Boston, baseball parks, both major and minor, are found throughout cities and towns in the U.S. and Canada. Many of them were built to fit into the existing urban landscape, and many stood right near railroad tracks. Back to movies and tying it in to modeling, how many remember the ballpark in Brewster’s Millions, the one with the railroad running through the outfield? That would make a very interesting model; you could scale it down to fit in a Little League field. Hopefully someday I will do one myself and write a more in-depth story on how it was done. Until now it will be on the back burner until I finish my brewery.

Next time, the stars from movies and TV come out to shine