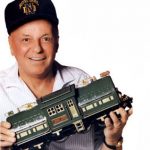 WHO PLAYS WITH MODEL TRAINS

Who plays with toy trains and/or model railroads? They seem to be just about anyone: from CEO’s to Rock Stars to Locomotive Engineers! We do seem to come from all walks of life. Over the years, I have met some of the most interesting people in my life through my association with this hobby.

It was not too long ago I was on the train show circuit for Orange Blossom Hobbies. I began working for Orange Blossom Hobbies train department in the summer of 1995. During that time, I got to travel all over the eastern half of the US and into the mid west. At these shows some famous and not so famous would come to see what we had to offer.  It was here that the diversity in the hobby really showed its identity.

While doing a show in Houston not far from the NASA facility in Pasadena, Texas, I meet Leslie Eaton. Leslie is a Master Modeler in the NMRA (National Model Railroad Association), the highest honor which that organization gives a modeler. Leslie also is an engineer at NASA. She designed a lighting system for the flight deck of the Space Shuttle. She later incorporated that lighting system’s design into model railroad workshops that she gave at NMRA events. Leslie models in N-scale and is the point person of the NASA Area N-Scale Operating Society.

In Florida, a regular customer of Orange Blossom’s was Irv Batten. Now Irv’s job is to make sure every time Tiger Woods (or any PGA pro) hits a golf ball in a PGA tournament, it is recorded. Irv is a professional scorer for the PGA. Irv was even featured in Sports Illustrated a few years back on a story they did about people behind the scenes in sports. Irv also loves the Santa Fe and other western roads and is a very good modeler with an excellent HO model railroad. Irv has also learned how to perfect modeling those large cactus trees you see in our western deserts – the nicest miniature replicas of these I have seen.

Here are some other notable celebrities who have come by from time to time. Curt Schilling, looking for PRR brass models at a train show in Philadelphia; Tom Snyder-always at the Great Scale Model Train Show, and always parked in a fire lane; Jon Bon Jovi buying an Overland Model of a UP SD40-2; Rod Stewart at the NMRA national convention in Kansas City wanting a pre-production model of a new brass bridge that was to be released soon. Rod could not wait; he wanted it then and there, however Rod did not get his way. It was not Orange Blossom’s model, but I did get the story direct from the importer’s mouth.

Then there are those I never met but love model or toy trains and would buy from Orange Blossom from time to time: Frank Sinatra, David Brinkley, and Rusty Wallace. Now Rusty Wallace was not a model railroader but at the time was driving for the Penske Racing team. A key person in the Penske team was Jerry Breon, a model railroader with a very extensive PRR collection. Rusty and the Penske team were doing very well about 10 years ago – so well that Rusty wanted to show his appreciation to Jerry on his birthday. Enter Augie Hiscano, manager of the train department at Orange Blossom, racing fan, and friend of both Jerry and Rusty. There is this big race down in Homestead, Florida, and Augie is there with special passes for the events. Rusty to Augie: “I want to get something special for Jerry’s birthday. Can you pick out something nice? Here’s my credit card number.” Augie, of course, says OK and heads back to the shop that night. Augie knew that Jerry had everything PRR that OB had in stock at the time. However, Augie, that master of sales, remembered that in 1956 the PRR leased a dozen 2-10-4 from the Santa Fe railroad. And OB had in stock the new Super Crowns SF 2-10-4 from Hallmark, a great present for Jerry. The Hallmark Super Crown 2-10-4 is a beautiful model and expensive, so it would also be a great sale for Augie and OB. Now the only catch would be a locomotive having the same number as ones leased by the PRR. We had 4 in stock and one matched. Augie was happy; Jerry was happy; Rusty? Well, Rusty was happy that Jerry was happy, but he did let Augie know that he was little taken aback on the price, so Augie’s response was “Rusty, you said to pick out something nice for Jerry!”  In the end, everyone went home happy. However, I do not think Rusty ever called Augie for any more gift ideas for Jerry again.

There is quite a long list of celebrities that have taken on model trains as a hobby. They come from all points of the globe as well as many different forms of notoriety. A special person of note to me is Utah Phillips, folk singer, activist and railfan. Utah wrote many songs about trains including one about Nickel Plate’s 2-8-4 number 759, a famous steam locomotive that was restored to service in the 1970’s and powered many an excursion in its day. Today its sister, 765 still sees occasional service on the point of an excursion train.

Some other famous people who have caught the model train or model railroad bug:

There is even a Star Trek connection.  James Doohan (Mr. Scott) had an extensive model train collection, and Whoopi Goldberg and Patrick Stewart are both train buffs. The “Who” connection: Roger Daltrey and John Entwistle are both HO modelers. Mickey Mantle and Roger Maris did a commercial for American Flyer Trains back in the early 1960’s, and rocker Neil Young was part owner of Lionel Trains. Tom Brokaw is following in his predecessor David Brinkley’s path as an HO collector.

And let us not forget the man who always dressed in black, “Let that Midnight Special shine a light on me”- Johnny Cash. Johnny was the spokesperson of Lionel for many years. These are only a few of the people who have joined with thousands of other model railroaders around the world in this enjoyable hobby

But of course, our hobby is accessible to all – not just celebrities. In that vein another favorite story of mine is the little old man who walked up to our tables at the Great Scale Model Train Show in Timonium, Md. He looked at the brass we had in one of the cases, and started to eye a Seaboard Centipede by Overland Models. With not much enthusiasm, I asked if he needed any help. I did not think he could spend the $1,000.00 for the locomotive. “I like big locomotives,” he said. I replied with “Well that’s the biggest diesel we got in stock.”  His reply was “I like it, but I want the one with two of them.” Overland Models had also come out with the PRR Centipedes right before they brought the SAL units in and the PRR units were sold as a pair. “Yes, sir we have that set,” I said. His reply was “Can I see them run?” I was thinking this is a waste of time, but I got the models out and brought him and the locomotives over to the test track. They ran great and he seemed very happy, “Do you take credit cards?” “Oh Yes,” I said with a big smile! The card went through, and I really learned a big lesson. This person may not have been a celebrity or even looked as though he could afford the hobby.  But that old saying,” don’t judge a book by its cover,” held true.

Here at SMARTT, that list of interesting people continues. We had a senior executive of Microsoft who wanted a model railroad of South East Pennsylvania, where he spent his youth. Or the California wine maker that wants the Bavarian countryside and trains of Germany in the 1920’s. Doctors, bankers, business owners (both big & small), an entertainment mogul, large malls and famous museums have all come calling. There is just something that is so fascinating about this hobby that brings together such a diverse group of people.

Rock Stars, movie stars, NASA engineers, CEO’s and little old men-they all have different backgrounds, but they all have one thing in common: the love of watching miniature trains running around miniature mountains, rivers, and towns. I don’t know about you, but when I hear a Neil Young song, or see Frank Sinatra in a movie, I sometimes think about how we share that same love.

We have heard rumors from the UK that we were trying to acquire the same Bachmann Spectrum city buildings on eBay as Rod Stewart was. Apparently Rod had made a comment to some of his train buddies back in the UK that he was being outbid on some of these buildings. The irony here is that after the Model Railroader article on Rod’s layout came out we were speculating that Rod had cornered the market on the Bachmann buildings. These once plentiful kits were nowhere to be found, thus forcing us to go to eBay to finish our project, hence, unknown to us, we may have been in a bidding war with Rod. But it looks like we were both winners. Rod did an excellent job on kit bashing them. Check out the story on his layout in the December 2007 issue of the Model Railroader, and check out the two HO layouts on our website where we extensively kit-bashed these building kits.

There was a point in time when hobby shops were practically giving these kits away at $29.95. Now they are going for over retail on eBay.  Perhaps Bachmann should think about re-releasing them at some point as they are great kits.

It’s not really a problem for us since we design and laser cut so many of our own city buildings anyway. In fact there is nothing that we can’t reproduce accurately in house, but, like so many other people out there, we also love the fun of those E-Bay auctions.