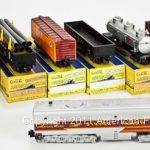 WHY MODEL RAILROADING PART 1 – MY BEGINNING

In the Christmas of 1954, I was only 15 months old, my parents had just moved to South Florida from Auburn New York a few months earlier. As they began to settle into their new house in Hollywood, a decision was made to buy a new television set for Christmas. They went to the local Sears store in Fort Lauderdale and purchased a Motorola TV. In those days TVs were very large and needed to be delivered. So when the day came and the delivery man arrived they were surprised to see not just one box but two. The sales person failed had to tell them that Motorola had a promotion going on with Sears. The promotion included an American Flyer Silver Train Set with the purchase of a television.

I was too young to have any memories of that Christmas, but what I understand from my parents, in our fairly empty living room that Christmas, there was a new Motorola TV, a few chairs, and a Christmas tree with a new American Flyer train set going around it.  Little could they have ever imagined the impact on our lives Sears and Motorola had given us.

Before I go any further let me give you a little background on my family. My grandfathers on both sides had worked for the railroads. On my father’s side his dad supplied laborers to many of the railroads in Northwestern New York. On my mother’s side her father and two brothers worked for the Lehigh Valley Railroad in Sayre, PA. So there was a strong railroad connection in our family.

As a pre-schooler, we did little to expand on that original set, only a cattle loader with a cattle car was added, a Christmas gift from my Aunt Sue. It was not until 1960 that things began to get rolling. In that year a second American flyer set, this time a Reading 4-4-2 steam locomotive and 4 cars was purchased. We also built our first train layout on a 4 X 4 plywood board with bench work and one circle of track. This was soon replaced by a 4 X 6, then a 6 X 10. Also we received a third train set, a Christmas gift from a friend, this time Lionel 027. It had a Lehigh Valley locomotive. That set was soon joined by a Varney HO Florida East Coast set. All three scales ended up on that 4 X 6 sheet of plywood. This was also the first time my father allowed me to participate in the construction of what was beginning to look like his trains. That first attempt at laying HO track was trying, and mixing three scales together on a 4 X 6 space was a challenge.

Over the next 10 years from 1962 -1972 my father and I constructed 5 different layouts together. Settling with American Flyer S gauge, our final endeavor was a 10 X 16 foot permanent layout in the garage. Over those ten years we would spend many a late night building the benchwork, laying track, wiring and doing scenery. Once we finished building, running trains would keep us in the train room (garage) late at night on the weekends till the wee hours of the morning!

Those early years of model railroading had a major impact on my life. Between my love of real trains and their scaled down counter-parts, trains had never left my life. Yes, there were girls-woman, baseball, fishing, and boats, but I always seemed to return to trains. Over the past 40 odd years I have had several collections, all in HO scale. They were made with brass and plastic, from the Pennsylvania Railroad to the Southern, Erie Lackawanna and then back to the Pennsylvania. I have become an expert modeler of structures in all scales, with industrial models being my forte’.  I will never forget the fun I had as a child playing with trains with my dad, and now I consider myself blessed that it’s not just my hobby, but my livelihood.

Model trains are not just for the individual but for the whole family; my family was very much involved throughout my life. This past April, I traveled to the DC area to participate in a conference on Latin America. This also gave me the opportunity to visit my daughter who lives in Alexandria, VA. After arriving by train from Florida, (is there any other way to travel?) my daughter’s boyfriend met me at the station and took me back to their apartment. After being shown my room, I discovered sitting on the table next to the bed the locomotive from Bachmann’s Harry Potter Hogwarts Express set, a Christmas present from 8 years ago. There next to the locomotive was a note, “Dad please fix”, and Dad was soon online ordering the part.

In Part Two, we will take a look at, “what is right for you as a model railroader.”